[WATCH] ‘Eternals’, ‘Sooryavanshi’ releasing this Diwali. What will you watch first? 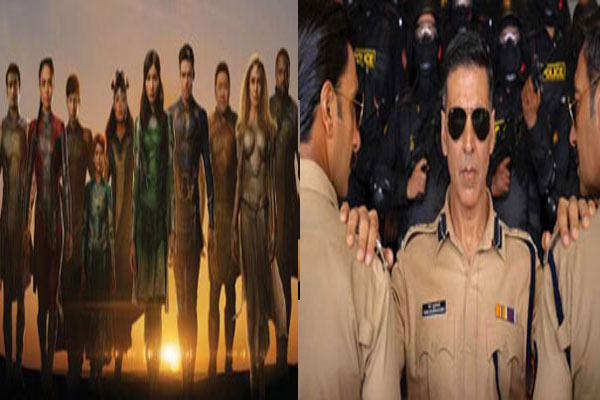 Bhubaneswar: Diwali 2021 might turn out to be an absolute frenzy for all movie buffs as Bollywood’s much-awaited action movie ‘Sooryavanshi’ and Marvel Studios’ action-adventure superhero movie ‘Eternals’ are both releasing in theatres on November 5.

Earlier, Marvel Entertainment had shared on YouTube a two-minute and fifty-one-second trailer of its upcoming superhero movie Eternals announcing that the movie will be released on November 5, this year. The movie will bring together onscreen a troupe of actors including Angelina Jolie, Richard Madden, Kit Harington and Salma Hayek.

On the other hand, Rohit Shetty-directorial Sooryavanshi’s release has been on hold for quite some time due to the closure of movie theatres owing to the ongoing Covid crisis in the country. However, after the Maharashtra government’s recent announcement of reopening movie halls in the state from October 22, the team has announced on social media platforms that the movie hit finally theatres this Diwali.

Akshay Kumar yesterday shared a photograph from the sets of Sooryavanshi on Twitter and wrote, “So many families would be thanking Sh Uddhav Thackeray today! Grateful for allowing the reopening of cinema halls in Maharashtra from Oct 22. Ab kisi ke roke na rukegi – AA RAHI HAI POLICE  #Sooryavanshi #Diwali2021.”

Sooryavanshi will be starring Akshay Kumar and Katrina Kaif in pivotal roles. That apart, the movie will have cameos of Ajay Devgn (as Singham) and Ranveer Singh (as Simmba).

So, this Diwali, it’s going to be a clash between Sooryavanshi and Eternals. Which movie will you watch first!

4 Mumbai cricketers test positive for Covid-19 ahead of Syed…