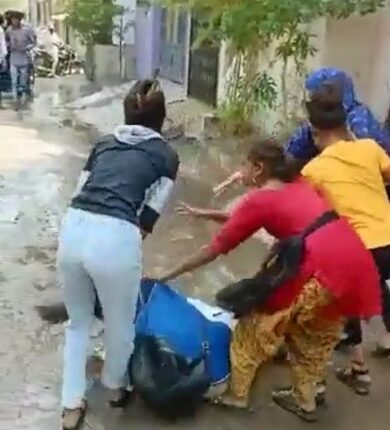 Indore: A video has gone viral on social media showing a group of four women mercilessly beating up a young female employee of a pizza chain in Indore, despite repeated pleas by the latter to stop.

In a video, the four women are seen beating the victim, an employee with Domino’s Pizza, with sticks and kept hitting her even as she fell to the ground.

Although there were people gathered at the site, no one stepped up to help the girl as she was crying out in pain.

The victim was also heard saying that she would go and complain to the police, following which the women replied, “go and complain”.

The girl finally managed to save herself by hiding in a nearby house.

According to reports, the victim later lodged a complaint against the four women at a local police station.

Police said they are trying to identify the accused.

A young woman was mercilessly thrashed, grabbed by the hair in full public view by a group of women in Indore. The video of the incident shows four women beating up the victim, a pizza chain employee, using sticks and fists, for allegedly staring at them @ndtv @ndtvindia pic.twitter.com/R6l2epYLpJ