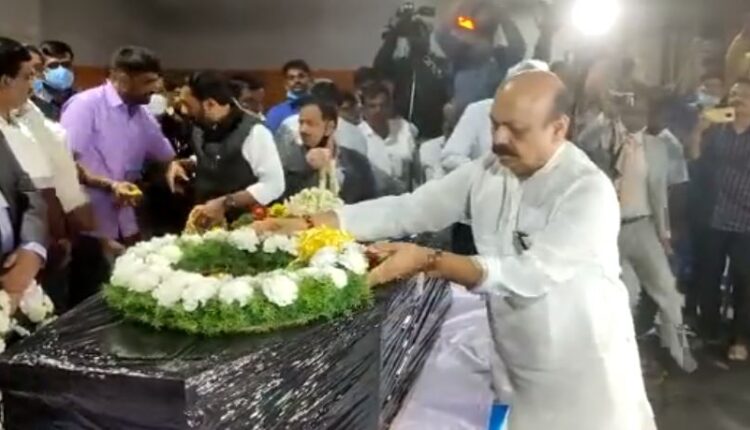 Haveri(Karnataka): The final rites of Naveen Shekarappa Gyanagoudar, the medical student who lost his life in Russian shelling in Kharkiv city of Ukraine, were performed in his native village Chalageri here on Monday morning.

His family conducted the rites as per Veerashaiva Lingayat traditions.

The mortal remains will be kept for public viewing till 2 p.m. and later handed over to the private medical college.

People from surrounding villages have lined up to pay their last respects to Naveen. Several students who returned from war-torn Ukraine have also come to pay their homage. Praveen, who came back safely from Ukraine, said that Naveen was a rank holder and guided juniors in Ukraine.

“We studied in the same college. Naveen was a gem of a person. He helped many who came from India to settle down in Ukraine. I had been to his room before the war started,” he said.

The final rites of #NaveenShekarappa Gyanagoudar, the medical student who lost his life in #Russian shelling in Kharkiv city of #Ukraine, was performed in his native village Chalageri Haveri on Monday morning. pic.twitter.com/IyXjY3gSZc

Chief Minister Basavaraj Bommai, who was present at 3 a.m. on Monday when Naveen’s body arrived from Dubai, is also likely to visit the native village offers his condolences to the family.

Remembering her son as a selfless bring, Naveen’s mother Vijayalakshmi said he got killed as he went out to fetch food for his friends. Had he stayed back in the bunker, he would have been alive. To make his death meaningful, the family has decided to donate his body to the medical college, she said. “In his last moments my son’s action to venture out was selfless,” she reiterated.

Naveen was killed in Russian shelling on March 1. Prime Minister Narendra Modi spoke to his father personally and comforted him. The father had asked Prime Minister Modi to bring back all students from Ukraine safely as they are assets of this country.

The government had granted Rs 25 lakh as compensation to Naveen’s family besides assurance to help his brother.