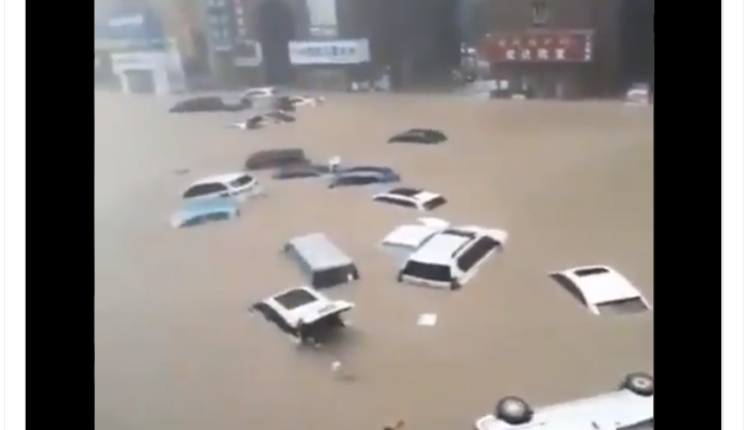 A total of 376,000 local residents have been relocated, said the provincial emergency management department.

This is currently the city of Zhengzhou in China. We are in a climate emergency. #ClimateActionNow #ClimateEmergency #China #Floods pic.twitter.com/7OdraXHcKK

The Henan provincial meteorological observatory activated the highest level of rainstorm alert at 11 a.m. Thursday, as rainfall is expected to continue for the next three hours in a number of cities including Anyang, Hebi, Xinxiang and Jiaozuo.

The local accumulated precipitation is likely to exceed 100 mm, according to the forecasts.

Local authorities have mobilised 39,583 rescuers for disaster relief, and 37,953 people have so far been evacuated in Huixian.

Despite the heavy rain in the region, traffic has gradually resumed in the province.

Zhengzhou Xinzheng International Airport scheduled 397 flights on Thursday, 219 inbound and 178 outbound, an increase of 315 flights from the previous day.

Meanwhile, 204 of Henan’s 403 highway toll stations have opened, while 193 have partially opened with traffic control and six others remain closed due to water-logging and flood control.

Railway authorities are making every effort to ensure supply for passengers on 35 trains stranded in Zhengzhou, while workers are clearing railway tracks to restore the traffic.