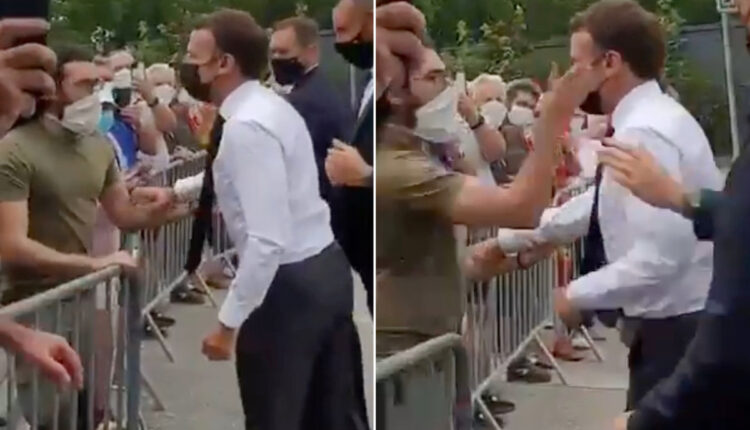 Paris/Bhubaneswar: In a shocking incident, President Emmanuel Macron was slapped in the face during an official visit to the south-east of France.

In a viral video, President Macron can be seen walking towards a barrier on an official trip to Tain-l’Hermitage on the outskirts of Valence.

As the President approaches the barrier, a man in a green t-short slaps him in the face before being subdued by security forces.

As per French media reports, two men have been arrested following the incident.

Addressing the media, President Macron later described it as an ‘isolated event’

“We must not let ultra-violent people take over the public debate: they do not deserve it,” he said.

The man in the green t-shirt had reportedly shouted ‘Down with Macronism’ before slapping the President. He was also believed to have screamed ‘Montjoie, Saint-Denis’, which is an old battle-cry in reference to the banner of King Charlemagne.

The video of the incident has been widely circulated on all social media platforms.

Despite the incident, Macron approached the barrier again to interact with people.

“I continued and I will continue,” he said. “Nothing will stop me.”

The French gendarmerie are investigating the motive behind the incident and as per French media reports, officers were out in force on the streets of Valence.

Odisha to lift lockdown restrictions in few districts after June 17!

30 to 40 countries unable to provide 2nd dose of Covid-19 vaccine: WHO

Watch: Dolphin jumps out of water and bites 6-year-old’s…