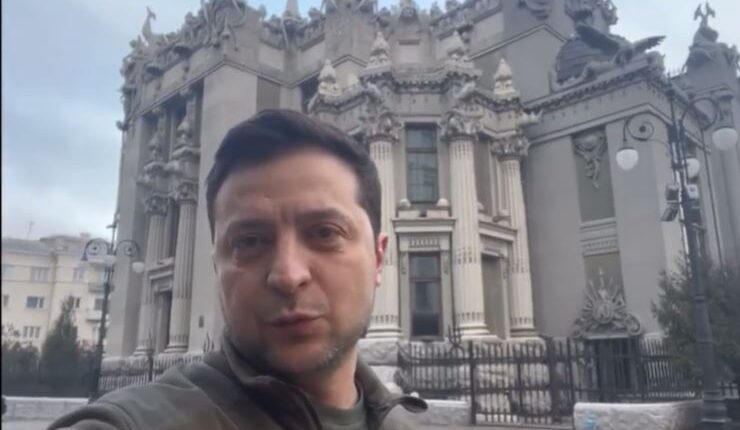 New Delhi: Ukrainian President Volodymyr Zelenskyy posted a video to social media on Saturday morning showing himself walking around the streets of Kyiv after a night of artillery fire in different parts of the city, telling the nation “I’m here”, Fox News reported.

Zelenskyy said in a short video address to Ukrainians, “We will defend our country,” and said that there’s a lot of false information online.

“Do not believe in fake information,” Ukrainian President Volodymyr Zelenskyy posted on social media after the sun came up in Kiev on Saturday morning. “I am here. We will be defending our country because our strength is in our truth.”

“We will be defending our country,” he added.

President @ZelenskyyUa just posted this video in front of the “Chimeras house” across from presidential office. “We are here. We are fighting. Glory to Ukraine”.#StandWithUkraine pic.twitter.com/daqBp4Ppq4

“A new day on the diplomatic frontline began with a conversation with @EmmanuelMacron,” Zelenskyy added in a Twitter post. “Weapons and equipment from our partners are on the way to Ukraine. The anti-war coalition is working!”

Street fighting broke out in Ukraine’s capital city of Kyiv overnight Friday as Russian troops closed in. Ukraine’s President Volodymyr Zelenskyy refused an offer from the US to have him evacuated from the country, saying, ‘the fight is here.’