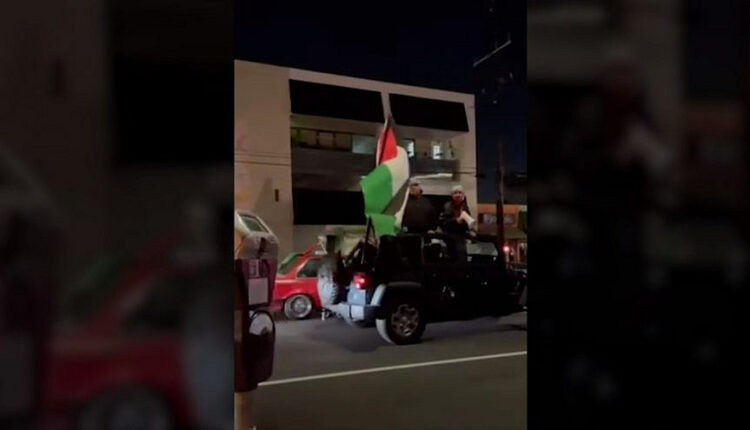 Los Angeles: A group of Jewish diners was attacked by  a group who were waving pro-Palestinian flags at a restaurant in Los Angeles, prompting the city’s police department to launch a probe into the case as an incident possible hate crime.

The incident occurred shortly at around 10 p.m. Tuesday in Los Angeles downtown, Xinhua news agency quoted the CBSLA news channel as saying in a report on Wednesday.

A group of men wearing all black got out of a car and started to attack the diners who were meeting at the restaurant to plan a wedding, yelling racial slurs, CBSLA said.

One of the diners, who is not Jewish, was quoted as saying that the attackers waving pro-Palestinian flags approached and began throwing bottles at him and the others he was dining with.

🚨🚨 Tonight pro-Palestinian individuals were driving with megaphones around La Cienega & Beverly (a heavily Jewish area) in Los Angeles and threw objects at Jews at a restaurant table. Some threw things back.

The pro-Palestinian group came to the sidewalk to fight.

The man said he was physically attacked when he tried to defend the group, adding he was pepper-sprayed during the attack and had to go to a hospital.

Los Angeles Daily News reported on Wednesday that police said the restaurant apparently was not damaged, and only one minor injury was reported and no one was arrested.

The incident occurred amid the escalation of the Israeli-Palestinian conflict, which triggered two pro-Palestine rallies in Los Angeles in the last four days.

Moments ago: A group of "pro-Palestine" attacked a table of Persian Jews at Sushi Fumi in Los Angeles, just outside of #weho city. #westhollywood / #LA #Antisemitism masked as #FreePalestine pic.twitter.com/jjdWNqESLO

On Tuesday afternoon, a large crowd of pro-Palestinian demonstrators gathered outside the Israeli consulate.

Last weekend, thousands of pro-Palestinian demonstrators rallied calling for an end to the violence.

Los Angeles Councilmember Paul Koretz said the restaurant incident was one of two attacks directed at Jewish victims over the course of 24 hours.

“Last night, members of a caravan of pro-Palestinian protesters targeted innocent Jewish diners in a vicious attack while they were sitting outside a sushi restaurant, and a separate attempt was made by two drivers to run over a Jewish man who had to flee for his life. Both incidents were captured on video. These were anti-Semitic hate crimes that are unconscionable,” Koretz said in a statement released Wednesday morning.

“We are not going to allow the violence in the Middle East to spill out onto the streets of Los Angeles. Everyone is entitled to express their opinion but never through violence.”

Benjamin Netanyahu’s 12-year reign could come to an…