Watch: Lionel Messi surprises 100-year-old superfan who records all of his goals in a notebook 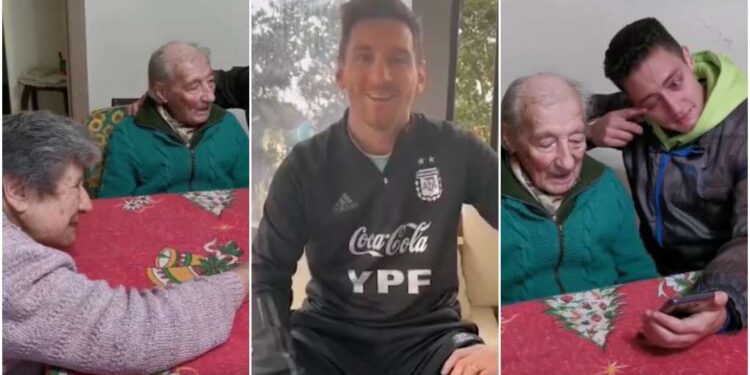 Barcelona: The past few days have been a dream come true for Lionel Messi. On Sunday, he lifted the Copa America Cup with Argentina at Maracana Stadium. Argentina beat Brazil in the final with Angel di Maria scoring the only goal in the 22nd minute, which would also become the final score line.

Messi’s joy at winning the Copa America was clear to see when he made a video call to his wife Antonela Roccuzzo and showed the medal with joy on his face. Now, the star footballer has sent a video message for a 100-year-old viral TikTok star, who is an ardent fan of Messi.

Don Hernan, a Spanish grandfather, has gained popularity on TikTok in recent weeks. Hernan has followed Messi from the very beginning of his career. He has recorded, by hand, with a pencil in his notebook, every single goal Messi has scored since starting his career. Hernan writes down every goal Messi scores and calls his grandson Julien Mastrengelo if he misses out on watching a match to make sure he doesn’t miss any of Messi’s goals.

In doing so, Hernan has filled up 730 notebooks covering Messi’s goals in a glittering career. After Argentina’s triumph at Copa America, Hernan had the fan moment of his life.

“Hernan. Your story reached me. It seems crazy to me that you have been recording my goals and, in that way, and that is why I wanted to send you a big hug and thank you for what you do, for all your follow-up work,” Messi says in a video message for Hernan shown by Julian.

After watching the video, Hernan’s eyes were filled with tears and responded by saying, “I always followed you and I will follow you. Until the end, I will walk behind you.”

The videos went viral on social media after Julian posted on his Instagram handle. The first video was of Hernan responding to Messi with the caption as “We did it! @leomessi I love you. Thank you very much with all heart”.

The second video shows the message for Hernan by Messi with the caption as “The greeting from @leomessi to my grandfather, I really still can’t believe it. Thanks from my heart”.

Messi won the Golden Boot and the Player of the Tournament award at Copa America, his first major international trophy.