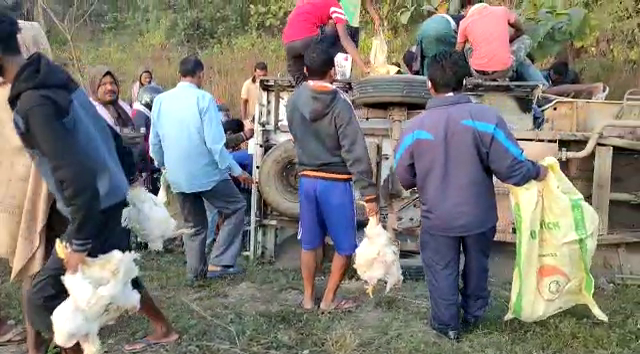 Sundargarh: A video clip went viral on social media featuring locals crowding around a poultry-laden goods carrier that had overturned near a forest under Bhasma police limits in Sundargarh district this morning.

The video showed that the locals gathered at the accident site not to call for help, but to take away chickens scattered around the fallen vehicle.

According to reports, a vehicle carrying poultry enroute to Sundargarh from Jharsuguda overturned near a forest at Badabahal area in the morning after the driver lost control over it. Though the driver escaped unhurt in the incident, the locals were spotted on the road to steal chickens in their carry bags.

It was like another road mishap, but the scene post-accident was funny.

The most interesting part of the incident was when the police reached the site and the locals ran off.