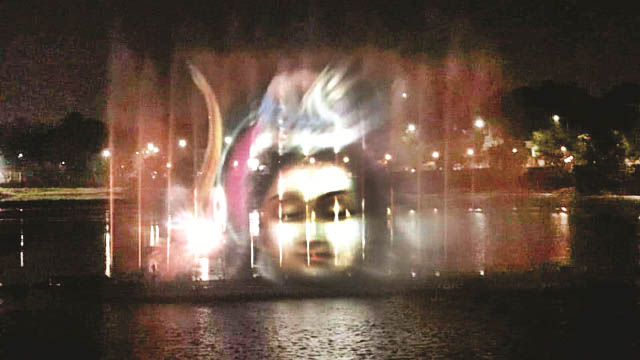 The entire lake looked colourful and was resounded with chantings dedicated to Lord Shiva, the presiding deity of the centuries-old Lingaraj Temple.

According to reports, the Rs 9-crore-project was functional in view of the tourists spending the quality evening in the city to tell them the story of Odisha within a brief period of time through attractive lights, music and colours.

Arrangements have been made by the Tourism department for smooth conduct of the show every evening. The authorities are also planning to make the show the functional in Odia, English and Hindi languages.

A committee headed by noted film director Sabyasachi Mohapatra has been set up to decide the time duration and select the artists for voice in the light and sound show.

The ‘Premier World’ has been given the charge to conduct the light and sound show in Bindusagar. Everything will be finalised within a month after the agency will present the dummy project to the committee, informed Mohapatra.

Along with the multimedia laser show, the newly constructed market complex and lodge for the tourists will be inaugurated soon, said the Tourism Minister.

After heritage walks, the light and sound show in the holy lake is another initiative by the authorities to attract tourists from across the globe to Old city Bhubaneswar.