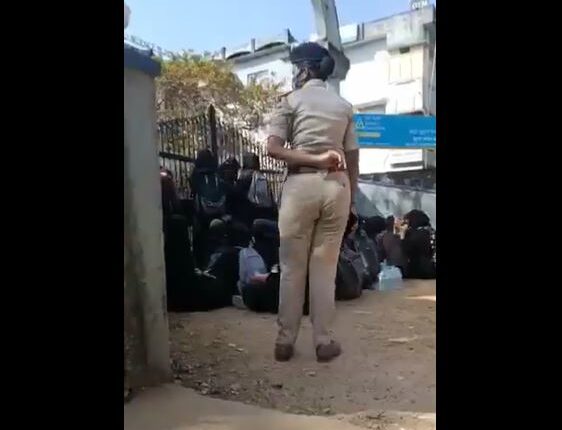 Udupi (Karnataka): The Muslim students of the Bhandarkar’s College in Kundapura of Udupi district in Karnataka on Friday staged a protest in front of the college entrance gate after being denied entry into the campus for wearing hijab.

Police have beefed up the security as hundreds of students came in support of the protesting girl students who are demanding to allow them attend classes while wearing the ‘hijab’.

A large group of girl students sat in front of the entrance gate of the college on the road blocking the way and raising slogans against the college management. The girl students voiced the slogan ‘hijab is our right’ and ‘we want justice’ and slammed the principal of the college for denying entry to them for wearing hijab.

The protesting girls alleged that they were pushed out of the campus and the college main gate was closed on them. They charged that they were treated like ‘dogs and criminals’. They claimed that they ‘are mentally hurt’ for making them stand on the road. They had to use the washroom of a nearby hospital, the girls said.

#Hijab row only continues to escalate in #Karnataka. Another college in #Udupi Bhandarkar college has refused entry to #Muslim women students wearing #Hijab. Students protesting outside can be heard saying *We want Education* pic.twitter.com/JnFYZZayVY

The parents argued that if the rule about the hijab was told to them at the time of admissions, they would have got their children admitted to another college. The college authorities maintained that if they are let in with hijab, other students will flaunt saffron shawls and they can’t afford to see the situation go out of hand.

The protesting students said that their seniors, older sisters who studied in the college, wore hijab without any problem. “This morning at 9.15 a.m., while entering, the principal, police, and lecturers denied us entry. They did not answer our questions. They maintained that they have high-level orders.”

They said that on February 1, all Muslim girls studying in 1 and 2 PUC were called to the library. “The Principal and other lecturers asked them to come to college without wearing hijab. The students said that if anyone had objections they should bring their parents. When they came with parents, local MLA Haladi Srinivas Shetty and others were present and no proper answers were given and the next day notice was given by the college authorities that hijab is not allowed in the college,” said the girls.