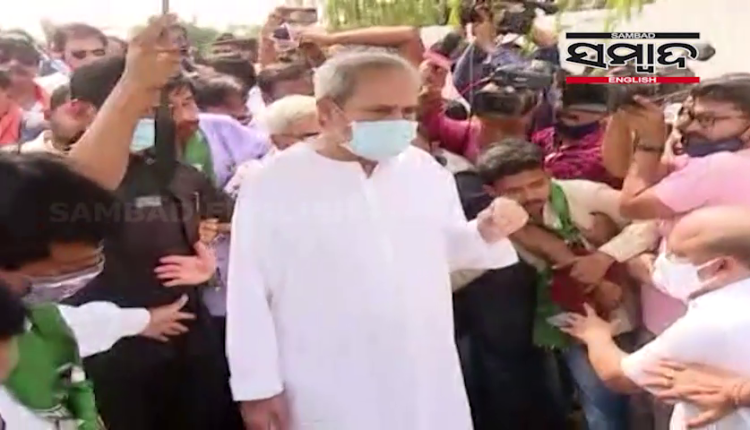 Bhubaneswar: In what came as a surprise for BJP legislators while agitating outside Naveen Niwas today, the Chief Minister himself came out of  his residence and welcomed the saffron party members for a discussion.

After the agitating leaders did not budge when MLAs of the ruling party appealed them with folded hands to come inside the CM’s residence, Naveen Patnaik came to the protest spot to convince them. He later welcomed them to his residence for a ‘healthy’ discussion over Mandi mismanagement in the state.

A high-pitched drama unfolded on the streets of the state capital when a delegation of BJP MLAs  holding placards marched towards Naveen Niwas to meet the CM and appraise him of Mandi irregularities. The agitators claimed that they are ‘searching’ for the CM, who turns up at every party function across the state but remains absent in the state Assembly.

On the other hand, BJD MLAs, including Samir Ranajn Dash and Pranab Prakash Das ‘escorted’ the agitators towards Naveen Niwas by blowing conches.

Finding the main gate of Naveen Niwas closed, the BJP MLAs sat in front of it and warned that they will not budge from the spot unless the CM himself comes out to invite them. Though all ruling party MLAs present at the spot requested them to come inside Naveen Niwas, the BJP legislators did not move. Finally, the CM turned up and convinced them to come with him inside his house.

CM coming out of his residence to meet agitators is a rare scene. This is the identity of a true statesman.

After the discussion, Leader of Opposition (LoP) Pradipta Naik said, “We would have returned, had the CM  not come out to invite us. However, we had a comprehensive discussion with the CM inside his residence on various issues.”

Regarding the matter of suicide attempt by BJP MLA Subash Panigrahi, Naik said, “Nothing of that sort was discussed in the meeting. The CM should apologize as a legislator of his state attempted suicide over famer issues.”

Bengal tiger among 47 animals from Nandankanan Zoo relocated to Rajasthan