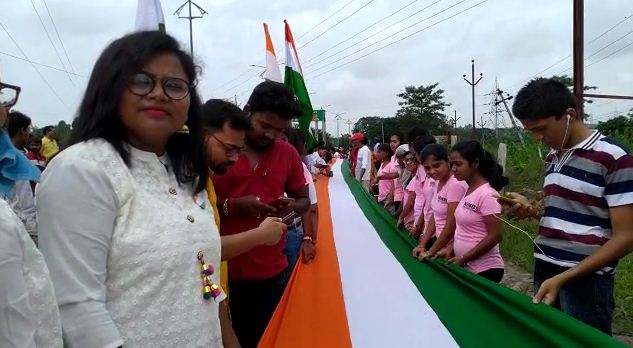 Rourkela: Independence Day celebrations in Odisha’s Rourkela caught everyone’s attention today as a national flag having a whopping length of more than 15 km was displayed in the steel city.

The tricolour, being created created by NGO ‘Smile Forever Foundation’, was held by students and denizens of the city through a human chain from Hanuman Vatika Chhak to Biju Patnaik Chhak here.

It was followed by mass singing of national anthem by thousands on the road. This apart, various cultural programmes were organised on the occasion. Family members of several martyred soldiers were also felicitated during the event.

Stitching work for the flag had started six months ago and as many as 12 tailors were engaged by the NGO. Clothes having length of 45,000 metres costing Rs 17 lakh were used for manufacturing the flag.