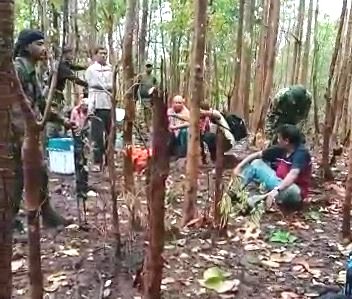 Phulbani: A polling party walked for over 15 km with EVMs fearing Maoist attack, after the completion of phase ll of Odisha elections 2019, here.

According to reports, polling ended at 4 pm yesterday in booth no. 12 of Barahala in the Maoist infested Balandapada area of Phulbani. The polling team officials however, could not return as they got inputs that Maoists had laid a trap for them by snapping trees, thus obstructing their path.

With possession of EVMs, the polling team could not return without being escorted by police personnel due to the blockade and therefore had to hide in the nearby forest.

“We fed on biscuits and water for dinner and got drenched in the rain, as well,” said Sushanshu Sekhar Meher, who led the 12-member polling personnel.

Later, they hiked for 15 km, accompanied by Special Operation Group jawans of Odisha Police to reach a CRPF camp in Balandapada and then arrived at the district headquarters in Phulbani today at 11 am.

Notably, Maoists had gunned down a polling staff, Sanjukta Digal following a landmine explosion at the same place, a couple of days ago.

Last week, 36 officials of six polling parties had walked 15 km in Maoist-hit Malkangiri to protect EVMs after the first phase of Odisha elections.