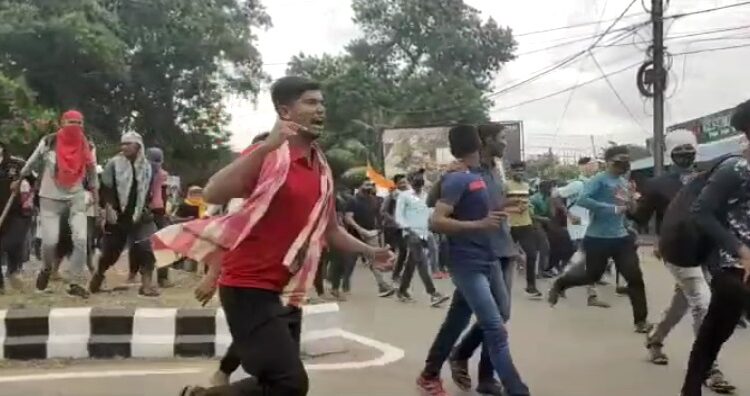 Cuttack: Amid nation-wide agitations over Central Government’s Agnipath scheme for recruitment in armed forces, the protest also raged in Cuttack against the defence recruitment reform.

Hundreds of agitators gheraoed the Army Recruitment Office in Cuttack city raising the concern over job security and post-service benefits under the new Army recruitment scheme.

The security forces deployed at the venue resorted to lathicharge on the protestors to bring the situation under control.

Moreover, the violent protests against the scheme continued in different parts of country including Bihar, Uttar Pradesh and Telangana on Friday with agitators disrupting the railway services and vehicular movement.

Several organisations have given a 72-hour ultimatum to the Centre to withdraw the Agnipath scheme or else they will call for Bharat Bandh.

Three days ago, the Central Government led by Prime Minister Narendra Modi had unveiled its Agnipath scheme for recruiting soldiers across three services. Under the scheme, about 45,000 to 50,000 soldiers will be recruited annually, and most will leave service in just four years. The aspirants between the ages of 17.5 years and 23 years will be eligible to apply.

However, the job aspirants hit the streets expressing disappointment over the provision of the scheme. The protestors raised two major issues — job security and pension — which are not mentioned in the scheme, whereas the army personnel used to get pension lifelong under the previous system in Ministry of Defence.

The new scheme envisages just a four-year tenure for most, and the Agniveers will not be eligible for pension benefits.