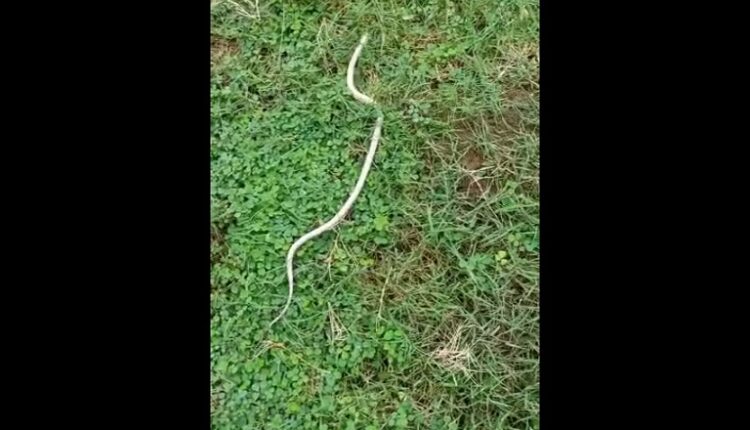 Kendrapara: A very rare snake belonging to common krait family was rescued from a home at Gangapur village under Rajkanika Block in Kendrapara district.

The white-colour with black eyes snake was around one-ft long in size.

The snake was spotted inside a house of Tapan Kumar Jena, a resident of Ganganagar village, on Sunday. He captured the snake and put it in a plastic jar. He informed the Snake Helpline for its rescue.

“I had never seen such rare snake before. I caught the snake with help of a stick and confined it in a plastic jar. We called upon the Snake Helpline to release it in a safe place,” Tapan said.

The youth had sent a few photographs of the reptile to Snake Helpline Founder and Khordha Honorary Wildlife Warden Subhendu Mallik for identification who confirmed it as ‘leucistic common krait’ and directed a member of the organisation for its rescue.

After receiving information, a snake helpline member rushed to the location and rescued the snake.

“A rare white snake had strayed into house of Tapan Jena in Rajkanika area. The villagers were panicked to see the reptile. On receiving information, I reached the house and rescued the snake. I released the snake into the wild, around 10 km away from the human habitation,” said Nalini Prasad Das, the snake helpline member.