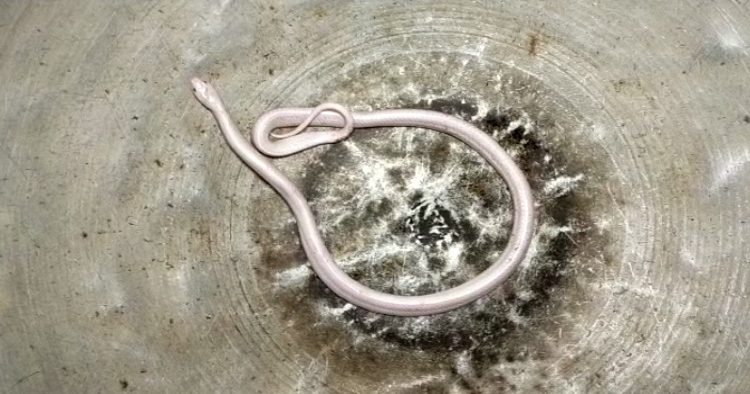 Bhadrak: A rare white snake was spotted at Panchapada village in Chandbali area of Bhadrak district in Odisha.

The 3.5-ft-long snake, which moves very swiftly, was rescued from a garden of one resident namely Jogesh Chandra Das last evening.

The locals were panicked to see the white snake suspecting presence of a giant snake of this species in the area.

“I found a white snake moving in my garden. I had never seen such type of snake in my life. Without harming the reptile, I caught it and kept it inside a jar. Such snake species was never spotted in this area before. Though I had heard about a giant snake in the area unlike this kind, but this was first white snake we found in our locality,” said Jogesh.

The locals claimed that the rare white snake is a species native to China. In the wake of rescue of white snake, they demanded the forest department to conduct a search in the area to discover such rare variety of snakes.

“After internet search, we came to know that it is a Chinese snake. Locals from across Chandbali thronged here to see the snake caught by my friend. They are panicked as we suspect presence of a giant snake in this area. We request the forest department to look for snakes of this species in our place,” said Badrinath Nayak, Jogesh’s friend.

Ayushmann: In an era of great content, ‘Bala’ will stand out