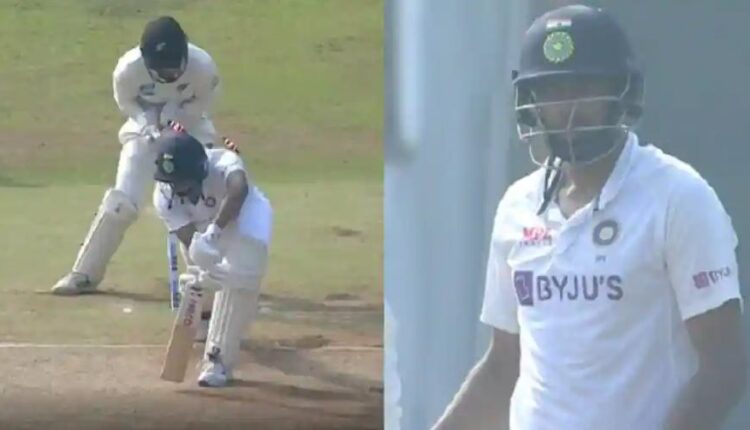 Mumbai, Dec 4 (IANS) India cricketer Ravichandran Ashwin created quite a buzz after being dismissed by New Zealand spinner Ajaz Patel for duck on Day 2 of the second and final Test at the Wankhede Stadium on Saturday.

Not knowing that Patel’s delivery had clipped the top of the off-stump and dislodged the bails, Ashwin initially thought that he had been wrongly given out caught behind.

He immediately signalled for a review, but soon realised his mistake and made his way to the dressing room even as the Wankhede Stadium screen kept flashing the decision under review sign.

The ball which dislodged Ashwin’s bails was in fact a peach of a delivery. The batter stretched forward to defend but the arc of the delivery was such that Ashwin couldn’t quite get to the pitch of the ball as it landed in front and spun just enough to beat the bat and shave the off-stump.

Ashwin’s dismissal off the first ball he faced left India at 224 for six. His dismissal also placed Patel on a hat-trick as the New Zealander had dismissed Wriddhiman Saha LBW with his previous delivery.

Axar Patel then joined Agarwal at the crease and the duo guided India to 291 before Agarwal fell to Patel on 150, the Kiwi bowler’s seventh wicket of the day.

India finally managed to put 325 on the board with Patel taking all 10 Indian wickets in the first innings.

Former Australian left-arm spinner Brad Hogg later tweeted that Ashwin should have consulted his partner, Mayank Agarwal, before going for the review.

“Surely India lose a review with Ashwin reviewing being bowled. If your unsure of why your out you consult your partner not be given a hint by the umpire. #INDvzNZ,” said Hogg.