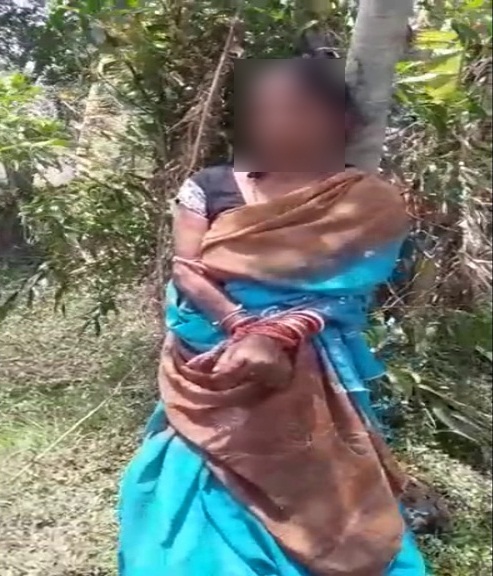 Kendrapara: In a bizarre incident, a woman from Odisha’s Kendrapara district was tied up to a tree and beaten up by the villagers for no fault of hers.

The victim identified as Sabitri Rout, a resident of Kankadia village under Rajnagar block in Kendrapara district, was meted out this inhuman treatment by her neighbour as the victim’s cattle strayed into the latter’s premises.

According to reports, Sabitri was dragged out of her house by neighbour identified as Sanjulata Jena, wife of Chaitanya Jena, after her cattle entered into their garden on Sunday. She was tied up to a tree and beaten up mercilessly by Sanjulata and her son.

Even, the mother-son duo did not offer the victim a drop of water and she was tortured for around three hours during day heat of summer.

“My neighbour Sanjulata abused me after my cattle strayed into her premises. I was tied up to a tree and beaten up by her and her son. When I opposed, she threatened me to thrash me in public by fastening me in the village. One of my family members sighted me and informed the villagers. My son approached the police and lodged a complaint against Chaitanya’s wife and later I was rescued,” said Sabitri, wife of Birakishore Rout.

“Very often our neighbour Chaitanya’s wife was quarreling with my mother. When I was absent at home at around 10.00 am, she fastened my mother to a tree and thrashed her. After I requested her to release my mother, she along with her son continued beating up my mother. Even, they did not give her water during the scorching summer. With no option left, I went to the police station and lodged a complaint following which police rescued my mother,” said the victim’s son Bichitra Rout.

A case has been registered and the probe is underway following the complaint by the victim’s family. However, no arrest has been made so far.

The incident was reported from Kankadia village about torture and inhuman treatment meted out to a woman by her neighbour after cattle entered into the latter’s premises. A case has been filed on basis of the complaint lodged by the victim’s son Bichitra Rout. The investigation is in progress, said Rajnagar IIC Sukant Kumar Patra.

beaten up by neighbourcattleinhuman treatment