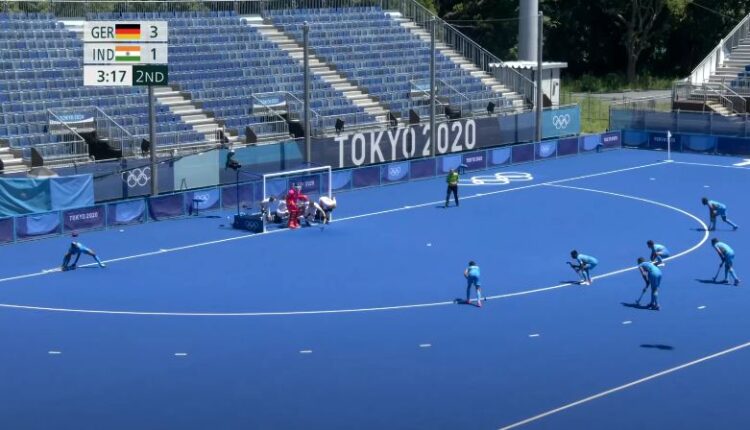 Tokyo: India fought back brilliantly from a two-goal deficit to beat Germany 5-4 in a high-intensity goal-fest to win bronze, the country’s first medal in men’s hockey at the Olympics after a gap of 41 years.

It was a dream come true for billions of hockey fans as India came back from 1-3 down to score an impressive 5-4 win that reminded its fans of the glory days when the Indians were a force to reckon with in world hockey.

India unleashed a four-goal blitz in four minutes as they came roaring back after being pinned down 1-3 by the Germans who started aggressively and created good pressure by going full press from the start itself.

But the Indians took control of the midfield, capitalised on the gaps created by the hard-pressing Germans, and counter-attacked brilliantly, cutting the German defence to shreds in that four-minute period that left the opponents shocked.

Till that time, it looked like Tobias Hauke’s side had taken control of the match as they opened the scoring in the second minute of their first attack and then scored twice within a minute as they took control of the proceedings with a 3-1 lead.

But the Indians were not done yet, they scored two goals of their own in the 27th and 29th minute through Hardik and Harmanpreet Singh, the latter powering a brilliant drag-flick into the German goal, capitalising on swift counter-attacks. The score was 3-3 at half-time and both teams had a lot to play for.

The Indians continued with the momentum in the third quarter and a minute after the restart, earned a penalty stroke when Mandeep Singh was brought down by Oruz in the shooting circle. Rupinderpal Singh’s push had too much power for German goalkeeper Alexander Stadler, who guessed the direction but could not get down fast enough to stop it.

And India made things more difficult for Germany when Simranjeet Singh was on target again in the 34th minute after he was set up by Gurjant Singh, who made a good run to the goal-line and sent a minus ball inside the circle.

Earlier, India made a slow start and were down a goal within two minutes as Germany went ahead when Timur Oruz shot home an opportunistic field goal. Florian Fusch made a run on the left flank and sent a ball into the shooting circle for Oruz to deflect it through Sreejesh’s legs to make it 1-0.

India responded immediately and made it 1-1 when Simranjeet Singh, who came in after Lalit Upadhyay was left out of the 16-man squad by coach Graham Reid, capitalised on some great work by Hardik Singh who stole the ball. Hardik gave it to Nilakanta Sharma, who set up Simranjeet with a superb long pass down the centre of the shooting circle.

But Germany scored two goals in quick succession, capitalising on defensive errors by the Indians to make it 3-1. They struck twice within two minutes, Wellen made it 2-1 when Hardik lost the ball near the shooting circle and a minute later Furk was on target when Indian defender Surinder Kumar delayed in clearing the ball and was dispossessed by a German forward (3-1 for Germany).

But the lead was short-lived as India responded immediately and launched a blitzkrieg of attacks that sealed the victory eventually.