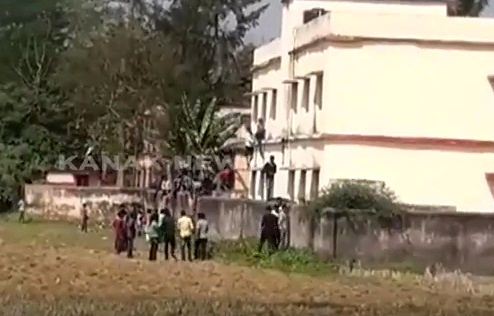 Jagatsinghpur: Measures taken by the Odisha government to prevent malpractices during the annual High School Certificate (HSC) examination conducted by the Board of Secondary Education (BSE) seemed unfruitful today in Jagatsinghpur as some locals were seen facilitating cheating at an exam centre in the district.

The incident took place at Benubaba Nodal Vidyapitha in Saramula here. Some locals were seen climbing on the boundary and parapet of the school building and communicating with the students during the exam.

Worth mentioning, in order to prevent malpractices, three-tier squads have been constituted. At the District Education Officer (DEO) level, 58 flying squads and 37 central squads have been formed. Teachers have also been included in these squads.