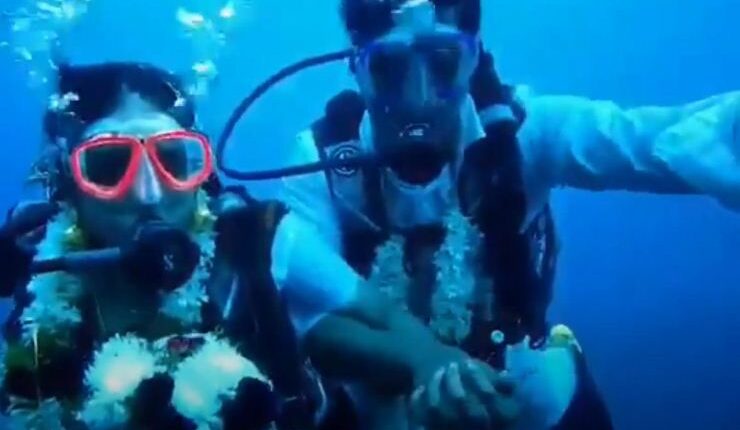 Chennai: A couple in Tamil Nadu tied the knot 60 feet under water in the Bay of Bengal near the coast off Neelankarai in the south of Chennai.

#WatchVideo: V. Chinnadurai and S. Swetha, a couple in Tamil Nadu, tied the knot 60 feet under water in the Bay of Bengal near the coast off Neelankarai in the south of Chennai. pic.twitter.com/y3yhaqGJ8u

Chinnadurai, the groom, said that he and Swetha dived under water during the auspicious time before 7:30 a.m., following the priest’s directives. Incidentally, the groom is a licenced scuba diver while the bride only started to learn scuba diving a month ago to be ready for her marriage.

For the wedding dive, as many as eight other divers accompanied the couple even as they were dressed in the traditional clothes of saree and vesti (lungi). For their safety, loose ends of their clothes were velcroed.

Following the underwater ceremony, which was videographed, the couple emerged on the shore to continue with the remaining rituals.

Incidentally, their wedding was at the mercy of the ocean currents and even compelled the organiser to make the couple keep their wedding date blank in the wedding invitation cards.

Meanwhile, the organiser said that a few more diving enthusiasts are interested in under water weddings.