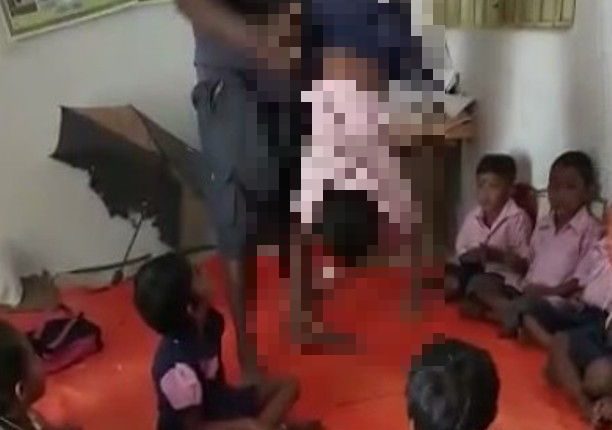 Keonjhar: In a gut-wrenching incident of child abuse inside an anganwadi centre in Odisha, a man entered into classroom and thrashed a minor boy by hanging upside down  for a trivial cause.

The incident had occurred at an anganwadi centre at Shivanarayanpur village under Hatadihi block in Keonjhar district on November 2. The locals blamed the incident after the video went viral on social media.

According to reports, two little children of Pramod Pal and Sanatan Ghadei had been to anganwadi centre on Saturday. When the anganwadi worker was busy at cooking, the two boys indulged in a scuffle following which Sanatan’s son went to his home and informed about it. Without thinking anything, the angry father rushed to the anganwadi and entered into the classroom where the children were studying.

Sanatan started thrashing the boy, the son of Pramod Pal, by hanging upside down in presence of other children. Shockingly, the anganwadi worker was unaware of the incident took place inside the classroom.

The entire scene was captured on a mobile phone. Tension prevailed at the village after the video went viral on social media.

Reports said that Anganwadi Supervisor allegedly suppressed the matter following father of the victim made complaint over the issue.

However, no written complaint has been made in this regard so far.