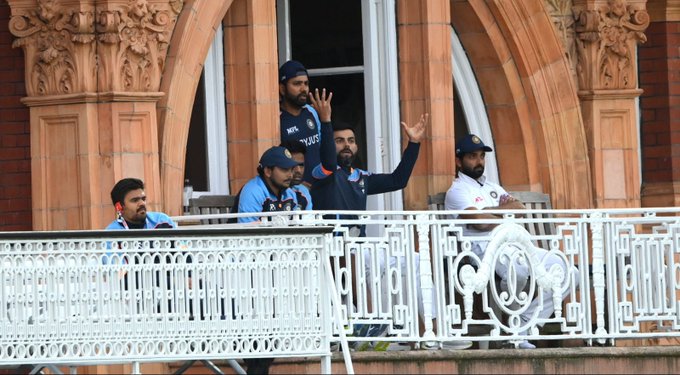 London: India cricket team skipper Virat Kohli was clearly not amused with the umpires’ call to continue play despite the fading light on the fourth day of the second Test against England at Lord’s on Sunday, and the way he gestured to his two batters in the middle, asking for play to stop immediately, became a source of much hilarity among his millions of fans and cricket lovers.

In a video, which has gone viral since Kohli can be seen raising both his hands sitting in the Lord’s balcony along with other teammates and asking the players in the middle to supposedly complain about bad light to the umpires.

But with the umpires deciding the match could go on, a bemused Kohli turns back towards opener Rohit Sharma, standing behind him, who also gestures towards to field in bewilderment.

The light was fading quickly when spinner Moeen Ali and England skipper Joe Root were bowling in tandem, and with the former having got rid of the Ajinkya Rahane and Ravindra Jadeja in quick succession, Kohli saw the gravity of the situation and immediately called for play to be called off for the day.

However, when England decided to take the second new ball with eight overs still remaining for the day, the umpires called early stumps.

India were struggling at 181/6 in their second innings on Day 4 when stumps were called early.

Vice-captain Rahane struck a fighting half-century and added 100 runs for the fourth wicket with Cheteshwar Pujara (45) but India had their backs to the wall in the second Test as they are just 154 runs ahead of England’s first innings total of 391. India had made 364 in their first innings.