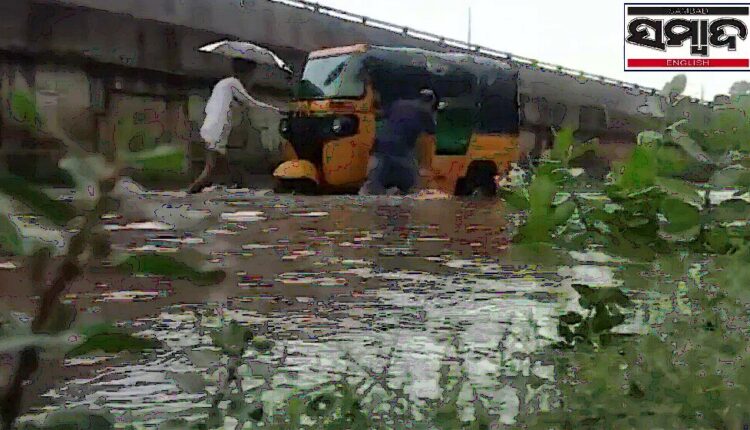 Bhubaneswar: Denizens in Odisha Capital were having a harrowing time today afternoon after rain lashed the city for a few hours. Roads were inundated, and people wading through waist deep water and vehicles getting stuck on roads were seen today.

Like every year, the city was somewhat parlaysed after a brief spell of rain due to rain water on the roads. Some two-wheelers having urgent work had lots of difficulties to cross inundated roads.

Even though the Bhubaneswar Municipal Corporation this year claimed desilting of drains in the city was carried out ahead of the monsoon, knee-deep waters flowing over roads in different parts raised eyebrows of many.

A portion of the National Highway-16 in front of the Iskcon temple in the city was inundated with waist deep water. Cars and auto-rickshaws were stuck on the road and people were seen trying hard to pull out the vehicles.

Similarly knee-deep water was flowing near Bomikhal on Cuttack-Puri Road, Laxmisagar, Sundarpada and other parts of the city.

Walk-in vaccine for all adults in Odisha Capital