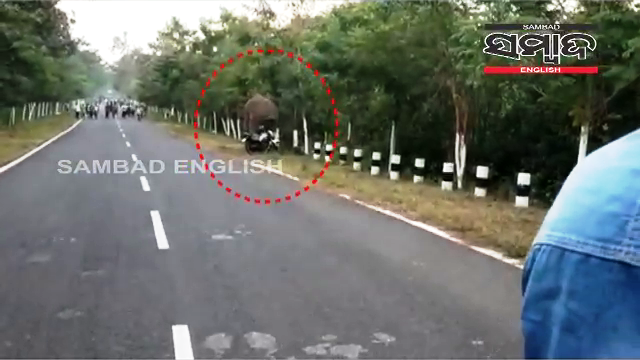 Angul: Commuters on Chhendipada-Jarapada road under Chhendipada Forest Range in Angul district were petrified after a wild elephant came out of nowhere and went on a rampage on the stretch this morning.

Vehicular movements on the road came to a grinding halt for around two hours this morning after the tusker, which strayed out of the forest along the main road near Patugadia. The animal was seen chasing the commuters. In a video of the incident, the elephant can also be seen flipping a motorcycle, parked on the roadside by a reporter, who had gone there to cover the incident. The vehicle was partially damaged in  the elephant menace.

A huge crowd was seen gathered on both sides of the road and screaming in a bid to drive away the jumbo. Vehicular movements resumed after the jumbo went back into the forest after around two hours.

Sources said after being separated from a herd, the tusker has been straying into human habitation for the last two months. It was seen roaming in Talcher town two days ago.  Meanwhile, locals expressed strong discontentment over the failure of forest officials in driving away the pachyderm.

Opp up in arms over Odisha Universities (Amendment) Bill…