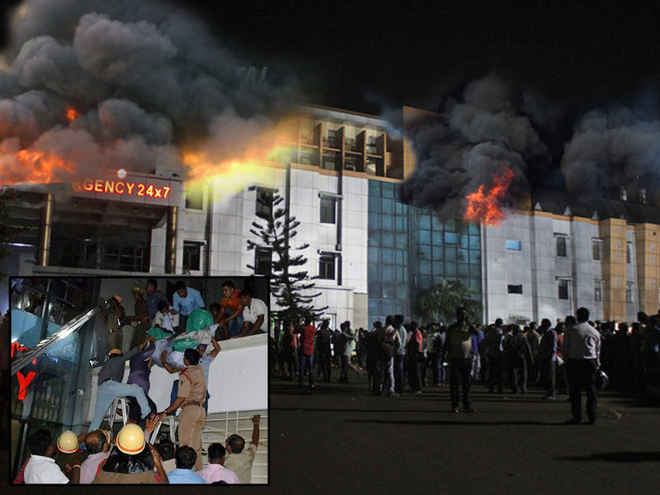 The fire in the SUM Hospital, which claimed 27 lives so far, has been doused. But a week after the incident, the anger and anguish over the incident are yet to die down, as the toll keeps mounting, with one of the injured succumbing on Monday.

Several of the bereaved families face an uncertain future, having lost their bread earners to the leaping flames. The plight of those rescued alive is no less, as most of the records of their treatment have been destroyed, hampering further medical assistance.

Many families, now mourning the dead or spending sleepless nights over the fate of their wounded kin, are demanding action against the hospital authority.

P. Saroj of Ganjam district, whose mother Kalyani died in the fire, said: “The state government must take action against the hospital authority for the fire mishap that snatched my mother.”

On the other hand, the government machinery — which had turned a blind eye on the violation of fire safety norms — has woken up and decided to crack down on the private clinical establishments for flouting safety norms.

“The district collectors should immediately inspect all the private clinical establishments in their districts, including private medical colleges, and wherever dereliction of non-compliance is found, immediate action must be taken under the Clinical Establishment Act and Fire Safety Act,” Health secretary said Arti Ahuja in a letter.

She asked the officials to ensure such tragedies do not recur.

The blaze and the heartrending scenes, which triggered a nationwide uproar, have already claimed a major scalp – Atanu Sabyasachi Nayak resigned as Health Minister owning moral responsibility over mishap.

To silence the critics, Chief Minister Naveen Patnaik has promised stringent action against those found guilty.

The opposition has, however, been unrelenting in its criticism of the Patnaik government, holding it responsible for the harrowing scenes of helpless and inform patients choking to death. Over 100 wounded people are still admitted in several hospitals, with some of them battling for their lives.

But as the politicos indulge in slugfests, the administration and the police are going all guns blazing to fix responsibility and nab the hospital big shots.

“We have already issued look-out circular against the trustees of the hospital. They will be questioned over their role in the hospital management and violation of safety norms,” said Police Commissioner Y.B. Khurania.

The police have seized important documents related to the hospital’s license from the Directorate of Medical Education and Training (DMET).

The investigation has revealed that the hospital did not have a fire safety certificate.

Binay Kumar Behera , Director General Fire Services (DGFS), said his department was informed about the fire at the hospital about 45 minutes after the first flames were seen in the dialysis ward.

“Had we been informed immediately, the casualties could have been less,” said Behera.

Under tremendous pressure after the government issued a show cause notice asking the hospital authority to reply why its license should not be cancelled, the management has tried to wriggle out of the tight situation by promising to follow all instructions and suggestions in letter and spirit.

The hospital is still running, even though the state government has sealed the dialysis ward and the ICU for further investigation.

“We have been making every possible effort to restore complete normalcy in the hospital in areas of patient care and treatment and we have been successful to some extent,” the management said in a statement.

Observers feel it would be difficult for the state government to take any harsh decision against the hospital as lot of students are pursuing their medical education in the institute.

BSF can give befitting reply to Pakistan: Rajnath