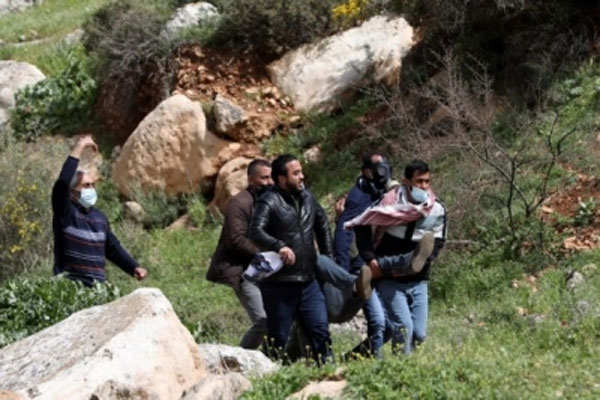 Ramallah: At least 217 Palestinian protesters were injured during clashes with Israeli soldiers in a protest against Jewish settlement in the West Bank, authorities said on Saturday.

The Palestinian Red Crescent Society said in a statement of the 217 injured protesters, 35 were shot by rubber-coated metal bullets and 182 subjected to suffocation after inhaling tear gas, reports Xinhua news agency.

Witnesses said that fierce clashes broke out on Friday afternoon between dozens of protesters and Israeli soldiers in villages of Beita and Beit Dajan near northern West Bank city of Nablus.

Clashes in Beita have been going on for almost four months in protest against establishing a settlement outpost on lands owned by the village’s residents, with the protesters waving Palestinian flags, chanting slogans against Israel, and throwing stones at the soldiers who fired rubber bullets and tear gas canisters to disperse them, they said.

Meanwhile, medics said that dozens of Palestinian protesters were injured by Israeli soldiers during clashes in al-Mughayyir, a village east of Ramallah, in protest against Israel’s settlement expansion, according to Marzouq Abu N’iem, head of the village.

The village head told reporters that the Israeli soldiers fired tear gas and percussion bombs at a peaceful demonstration that rejected the closure of the entrance to the village by sands.

Similar protests and clashes broke out near cities of Qalqilya and Hebron in the West Bank, according to Palestinian security sources, adding several Palestinians were injured by rubber bullets and tear gas.

In a statement, the Palestinian Ministry of Foreign Affairs condemned what it termed as the brutal Israeli army repression of peaceful protests and demonstrations to reject Jewish settlement in the West Bank.

“The Israeli army practices against the Palestinian protesters violate international law,” the statement said, adding “the silence of the international community encourages Israel to carry on with these practices.”

There has been no immediate comment from the Israeli side.

Anti-viral drug Molnupiravir may emerge as ‘game-changer’ in fight…