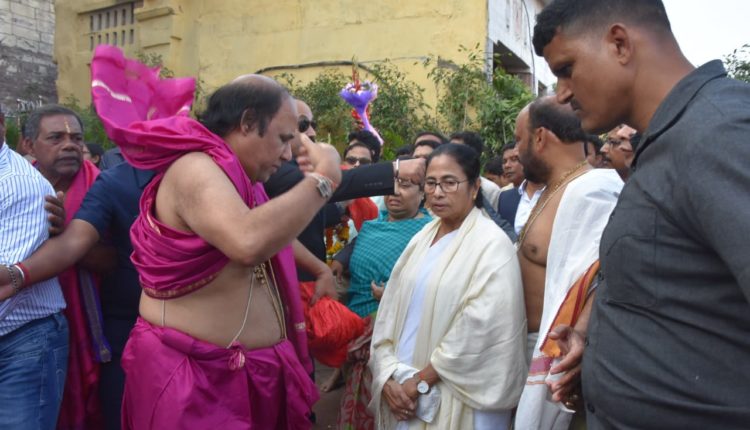 Puri: Chief Minister of West Bengal, Mamata Banerjee today visited the Shree Jagannath Temple in Puri and paid obeisance to the deities. At around 4.10 pm, the West Bengal Chief Minister entered the Srimandir and spent around 30 minutes on the premises of the temple.

Mamata offered prayers to Lord Jagannath and his siblings for world peace and harmony,

Speaking to media persons outside the Srimandir, Mamata said, “I am a devotee of Lord Jagannath and worship him at home daily. This visit to the Srimandir is very special. I prayed to the Lord for world peace. It is good for everyone when there is no violence and conflict.”

On the violence over Citizenship Amendment Act (CAA) in Delhi, the West Bengal Chief Minister replied, “We want peace, not bloodshed.”

She would meet Union Home Minister Amit Shah during the Eastern Zonal Council (EZC) meeting in Bhubaneswar on Friday.

She would meet Shah for the first time after the CAA was enacted.

Chief Ministers of Bihar and Jharkhand, Nitish Kumar and Hemant Soren respectively, are also scheduled to attend the EZC meeting.

Srimandir to remain out of bounds for devotees for next 2…