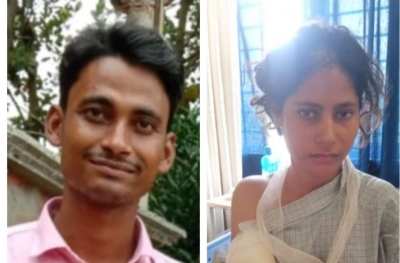 Kolkata: In a shocking case of jealousy or sheer inferiority complex, a man in West Bengal on Monday chopped off his wife’s hand from the wrist to prevent her from joining a state government nursing job.

The husband in question is Sher Mohammod, a resident of Ketugram in East Burdwan district and the victim is his wife, Renu Khatun. What was the worst is that he went to admit his wife at a local hospital on Monday morning after his brutal attack but concealed the severed body part at his residence to make sure that the doctors are unable to reattach it.

After admitting his wife, Sher Mohammad went absconding and soon after that, his family members too went into hiding.

Local residents told the police that Renu Khatun was undergoing nursing training and was working as a nursing assistant in a private hospital at the nearby industrial township of Durgapur.

Recently, she got the state government appointment too, which made her husband irate.

Local said that since Sher Mohammad was himself unemployed, he feared that his wife would abandon him after getting the government job. There were frequent quarrels between the couple on this count, as Sher Mohammad was insisting that she not accept the job. However, Renu Khatun did not agree.

Ripon Sekh, her elder brother, told media persons, since the time her sister got the state government appointment letter, Sher Mohammad had been insisting that she reject that offer.

“However, my sister always dreamt of pursuing a nursing career and she refused. We never knew that Sher Mohammad’s feeling of insecurity will take such a tragic turn,” he said.