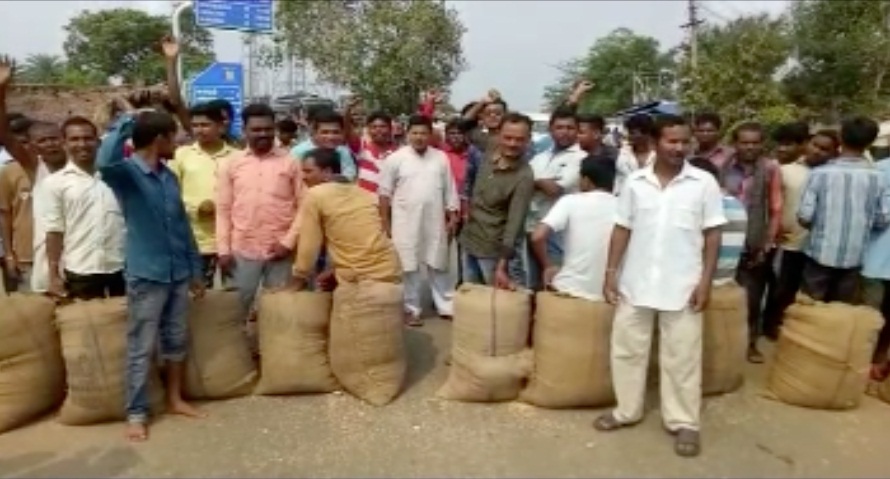 Bhawanipatna/Subarnapur/Bhubaneswar: There seems to be no end to the woes of farmers in Odisha’s Kalahandi as millers are not turning up at mandis (market yards) for the last three days to procure paddy forcing farmers to distress sell their produce.

Protesting farmers with bags of paddy blocked National Highway (NH) no. 26 at Moter Chhak under Jaipatna block in Dharmagarh sub division of the district today.

As a result of the road blockade, traffic came to a standstill on the Nabarangpur-Bhawanipatna highway.

Farmers alleged that since Food Supplies Department was insisting on millers to pay handling charges as millers were not turning up at mandis to lift paddy.

For the last three days, millers have not lifted paddy from 71 mandis in Dharmagarh sub division alone.

“What can farmers do? They are demanding 7-8 kg per quintal. Farmers are today forced to take to the streets. We will continue with our agitation till our demands are met with. If the situation demands we will take our agitation to the District Collector’s office and Civil Supplies office,” said Debendra Patjoshi, an agitating farmer of Dharmagarh sub division.

The situation in Subarnapur district is no different. Though mandis are open in the district, millers are not turning up to lift paddy.

Rains have added to the miseries of the farmers. They are forced to sell their paddy to middlemen at as low as Rs 1,150 per quintal against the government’s minimum procurement price of Rs 1,470 per quintal.

“Since millers are not turning up at mandis and rains playing spoilsport we are forced to sell our produce to middlemen at Rs 1,150 per quintal,” said Maguni Dehury, a farmer of Bijepur.

However, Food Supplies Minister Surjya Narayan Patro said that the issue has been sorted out.

“Since there was audit objection that has been stopped from last year all over Odisha. For that reason, some mill owners have stopped lifting paddy from mandis for the last two days. The District Collector has already discussed the matter. I think the matter might have been sorted out by now,” informed Patro to reporters at Bhubaneswar.

At least 10 dead in lightning strikes in Odisha