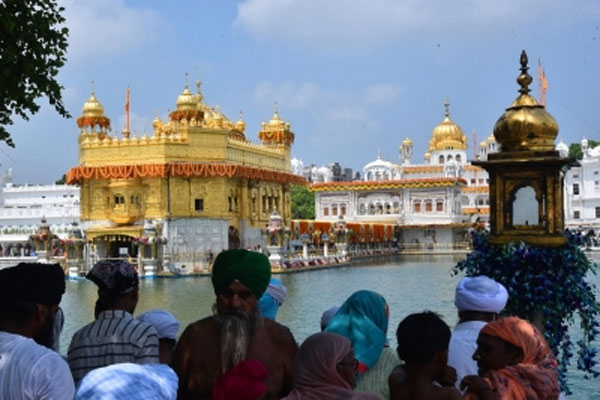 Amritsar: A wheelchair-bound devotee, who was denied entry into the Sri Darbar Sahib (Golden Temple) here, has sought to make it accessible for physically challenged too.

However, the Shiromani Gurdwara Parbandhak Committee (SGPC), which has control over Sikh religious affairs and manages gurdwaras, including the holiest of Sikh shrines Harmandir Sahib, popularly known as the Golden Temple, says ‘sewadars’ are deputed for convenience of the ‘sangat’ or devotees.

The SGPC’s statement comes after wheelchair-bound graphic designer Inderjeet Singh Dang on Saturday tweeted by saying, “How can someone who’s permanently on wheelchair supposed to go to Main Darbar without using wheelchair on pathway?

“I request officials to look into this matter and help to make Darbar Sahib accessible for all.”

The SGPC replied to him by saying, “In case any pilgrim with wheelchair, they r helped by Sewadars by lifting them up with hands & taken to Darbar Sahib. Wheelchair cannot be allowed due to certain reasons. Please ask Sewadar help to pick the person & help in Darshan.”

At this Dehradun-based Dang replied: “Lot of Sewadars are extremely rude and arrogant and they simply say you can go by yourself or don’t go.

“Also what are the reasons to prohibit wheelchair on pathway? It’s just a plain pathway. I understand not allowing wheelchair inside the Main Darbar but it’s just pathway.”

Saying everyone has equal rights to visit the sanctum sanctorum of, Dang further said, “It’s very uncomfortable and inappropriate to get lifted by someone specially for females when there is a simple way to go just by going through wheelchair.”

Seeking the Prime Minister’s intervention, he said, “This is not a Sikh related issue…This issue is for every wheelchair user who is unable to pay obeisance at Shri Darbar Sahib because of @SGPCAmritsar rule of not allowing wheelchair to the passage. I raised this issue earlier but no response from SGPC.”

Earlier, the SGPC said wheelchair assistance is available at Sri Darbar Sahib plaza and in the whole complex.

Sri Harmandir Sahib is built on a 67 feet square platform in the centre of the sarovar (tank). The temple itself is 40.5 feet square. The Darshani Deori (an arch) stands at the shore end of the causeway. The door frame of the arch is about 10 feet in height and eight feet and six inches in breath.

The door panes are decorated with artistic style. It opens on to the causeway or bridge that leads to the main building of Sri Harmandir Sahib. It is 202 feet in length and 21 feet in width.

Its architecture represents a unique harmony between the Muslims and the Hindus’ way of construction work and this is considered the best architectural specimens of the world.

It is often quoted that this architecture has created an independent Sikh school of architecture in the history of art in India.