When President, VP and PM wished Odisha people on Nuakhai 28 yrs ago 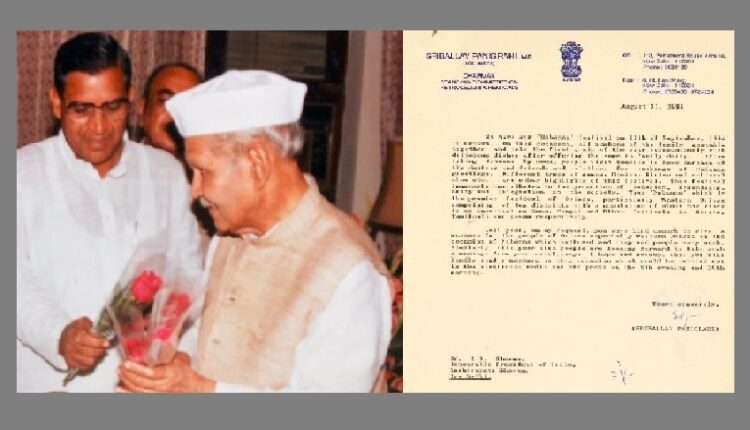 Bhubaneswar/Dubai: Long before the advent of internet, social media and even electronic media, some of Odisha’s leaders kept working tirelessly to promote Odisha’s culture at the national level. Late Sriballav Panigrahi, former Minister and Member of Parliament was one of them. Widely regarded as one of the loudest Odia voices in Delhi, during his terms as a Member of the Lok Sabha in the 80s and 90s, Sriballav’s contribution in popularising ‘Nuakhai’ received renewed attention with the disocvery of certain documents.

While clearing some of his old papers (letters, files etc.) in Sambalpur, his son, Dubai based prominent Non Resident Indian Priyadarshee Panigrahi chanced upon an old envelope. He found that 28 years ago, in August, 1994, Sriballav had written to the then President of India Shankar Dayal Sharma, Vice President K R Narayanan and Prime Minister P V Narasimha Rao about ‘Nuakhai’. He had educated them about ‘Nabanna’ and had requested them to released a message for the people of Odisha on this occasion. 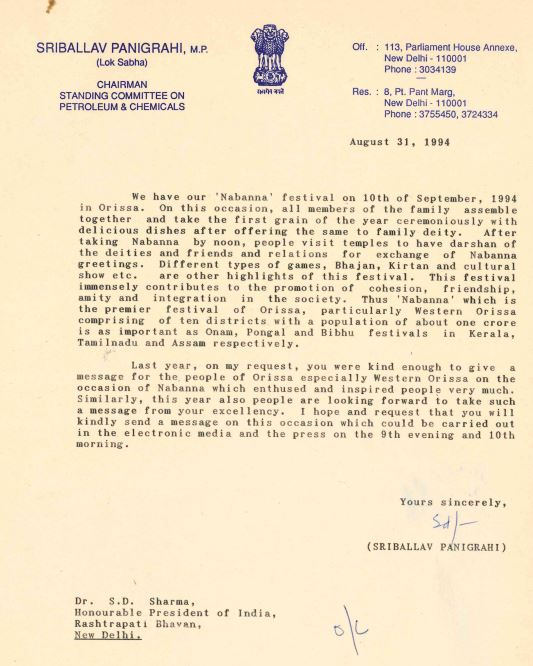 “I was delighted to discover that all the three dignitaries had indeed wished the people of Odisha on ‘Nabanna’,” said Priyadarshee.

In his letters, Sriballav has talked about ‘Nabanna’ and explained the festival in detail. Important aspects of the festival like families gathering together and taking the first grain of the year after offering it to the family deity, exchange of greetings, temple visits, meeting friends and relatives etc. are highlighted. He also talks about how this festival promotes cohesion, friendship, amity and integration in the socitey. He has compared ‘Nabanna’ with other harvest festivals like Onam, Pongal and Bihu. 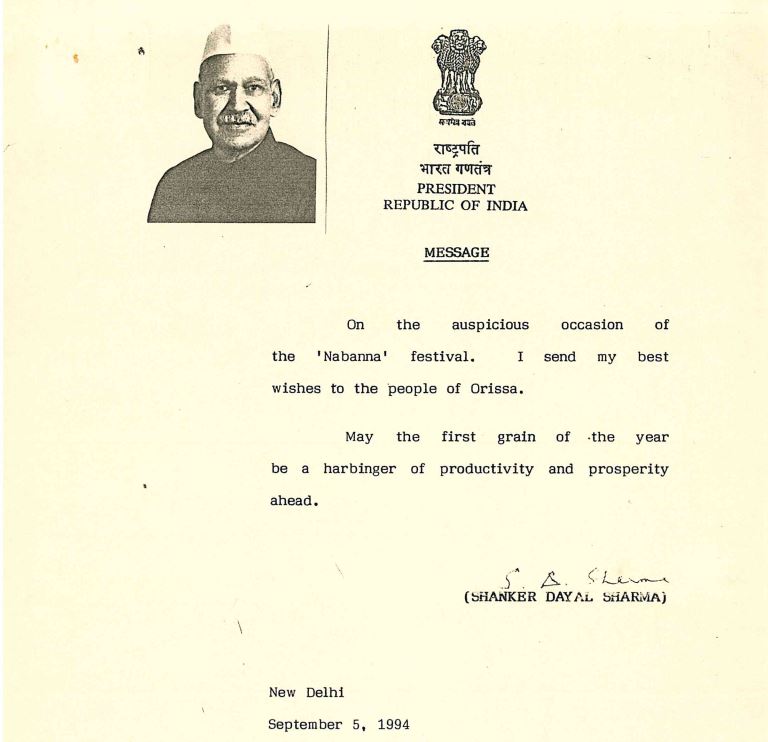 Interestingly, the message from Shanker Dayal Sharma, the then President of India, was sent to Sriballav by S. Jaishankar, External Affairs Minister in the current Narendra Modi government. He was  then the Press Secretary to the President of India. The President wished for the first grain of the year to be the harbinger of productivty and prosperity.

Similarly, K R Narayanan, the then Vice President of India, who went on to become India’s 10th President, had also offereed his felicitations to the people of Odisha on the occasion of ‘Nabanna’. 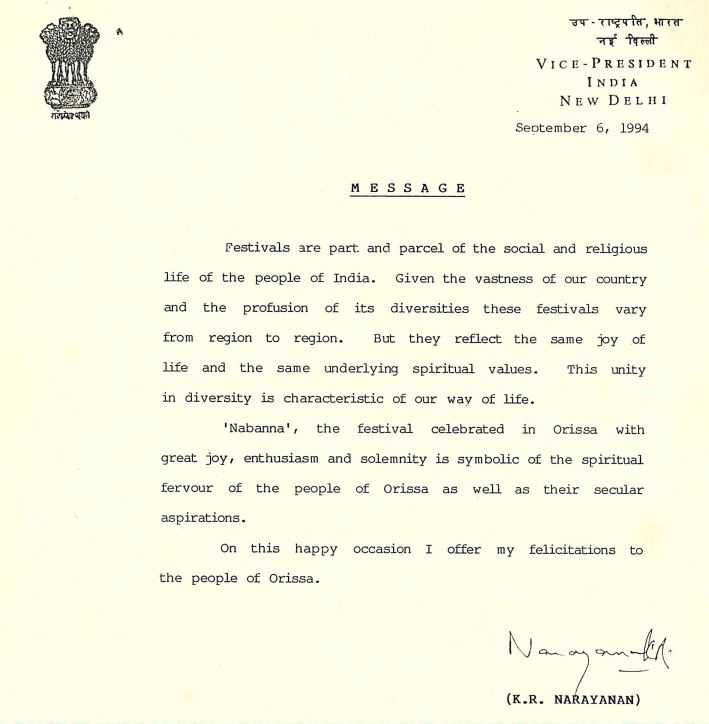 In addition to this, the then Prime Minister P V Narasimha Rao had also wished the people of Odisha through a ‘Telegram’ message. He wished that this festival will generate greater prosperity for the people of Odisha and the entire country. His wishes were conveyed to Sriballav by Dilip Sinha, a career diplomat, who was then Director of the Primer Minister’s Office (PMO). 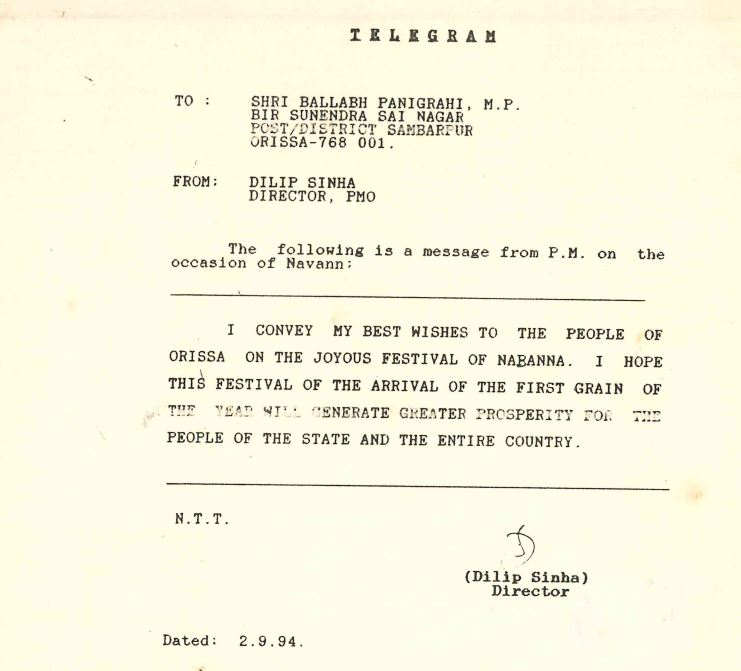 Sriballav’s close friend and long time political associate, former Minister and Odisha Pradesh Congress Committee (OPCC) President Niranjan Patnaik fondly remembers his association with him. Niranjan said “Sriballav’s heart was in the progress of Odisha and her culture. At the same time he used to fight tooth and nail for Sambalpuri language, music & dance and its rich handlooms. He used to promote these aspects very vigourously. He always fought very strongly for the removal of regional imbalance in Odisha. I also remember him raising the issue of recognition of Sambalpuri language in the Lok Sabha. All along his life, he fought for the installation of Veer Surendra Sai statue on the Parliament of India premises. I miss him dearly”.

According to senior journalist, Subhas Panigrahi who also happens to be the younger brother of Sriballav, “Sriballav dada used to take pride in his roots and it was always his edeavour to popularize our culture at the national and international level. Long before it became fashionable to Tweet, put pictures on Facebook and WhatsApp, Sriballav dada had showcased our Nuakhai at the national and international level and had made the whole world aware of our premier agrarian festival’.