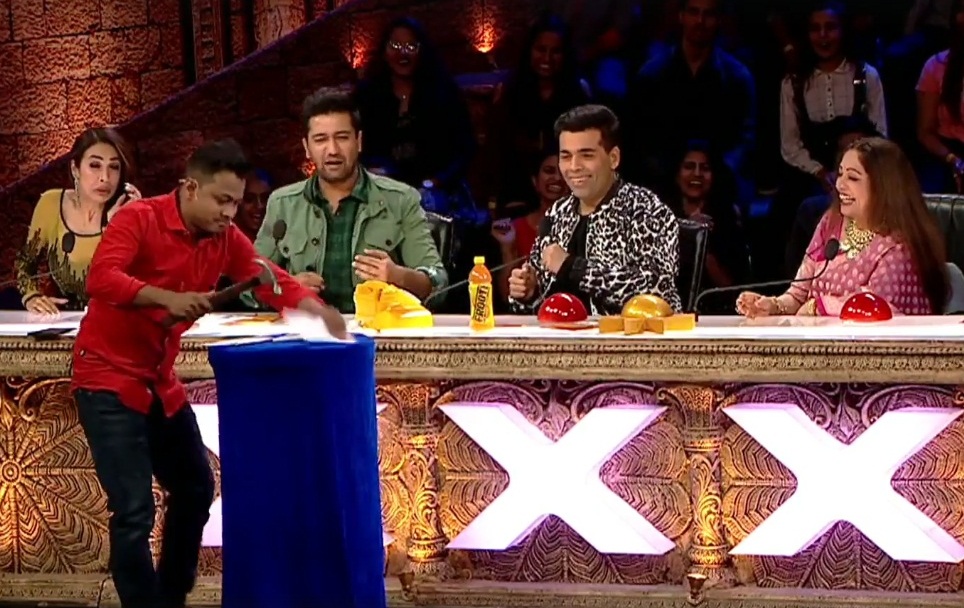 Bhubaneswar: Yes, you read that right. Odisha’s Bishnu Prasad almost battered Karan Johar’s phone on reality television show India’s Got Talent (IGT). The Bollywood director’s heart came into his mouth when he saw his handset being smashed to smithereens, but lo and behold, Bishnu pulled the former’s mobile phone and revealed that it was all an act of magic.

Odisha couple selected for semi finale at India’s Got Talent

Originally hailing from Dhenkanal, Bishnu is a magician in the Odisha capital and is an entertainer with his magic tricks at a city-based hotel. He was recently seen in the eighth season of IGT.

He enchanted the judges Malaika Arora Khan, Karan Johar and Kirron Kher with his magic tricks with cards. Moreover, in a clever ruse, a scared Malaika thought that she was emptying a cup of juice on her head, but it turned out to be empty and stunned the jury panel.

Karan Johar complimented his simple personality and also said that his was the best magic act that the show has ever witnessed. This act and his light-hearted banter earned him the golden buzzer (the first golden buzzer of season 8) that sent him directly to the semi-finale as the first semi-finalist of IGT 2018.

In the semi-finale he showcased an act where he took Karan Johar’s mobile phone, stacked it with other handsets and put each handset in a separate envelope. He then hammered each envelope and the mobile phone within, as the shocked judges looked on. Karan Johar was horrified at the prospect of his phone being broken to pieces but Bishnu revealed that his phone was safe.

“I have been doing magic since the last ten years. I was in awe of the tricks and illusions since childhood, so I decided to pursue my interest as an adult. I have been under the tutelage of Sukesh Pattanaik and Santosh Choudhury, who I have learnt a lot from. I prefer using everday objects like playing cards, coins, balls, watches, etc. as they aid in close-up magic, which is my forte,” said Bishnu, whose friends encouraged him to display his tricks on a reality show and he, therefore decided to audition for IGT.

Speaking about his reality television experience, this conjuror said that the judges and crew admired his talent and cheered him. Celebrity guest judge Vicky Kaushal also asked Bishnu a lot of questions on techniques of various tricks after his semi-finale performance.