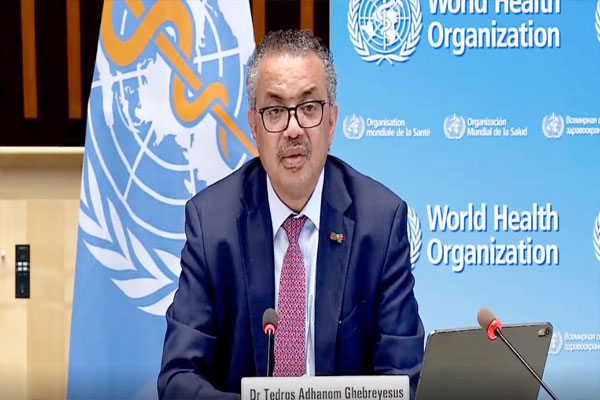 New Delhi: WHO Director General Tedros Adhanom Ghebreyesus has welcomed the Chinese government’s admission that almost 60,000 people died due to Covid between December 8 and January 12.

The WHO chief spoke with Minister Ma Xiaowei, director of China’s National Health Commission, about the COVID-19 situation in the country.

“I appreciated the release of detailed information, which we request they continue to share. Asked for the sharing of further sequences and cooperation on understanding the virus origins,” said Ghebreyesus.

Chinese officials provided information to WHO, and in a press conference, spoke on a range of topics, including outpatient clinics, hospitalisations, patients requiring emergency treatment and critical care, and hospital deaths related to COVID-19 infection.

WHO said in a statement that it is analysing the information, which covers early December 2022 to 12 January 2023.

“It allows for a better understanding of the epidemiological situation and the impact of this wave in China,” said the world health body.

WHO requested that this type of detailed information continue to be shared with them and the public.

“WHO notes the efforts by Chinese authorities to scale up clinical care for its population at all levels, including in critical care,” it added.

While the Chinese Center for Disease Control and Prevention has earlier reported that Omicron sublineages BA.5.2 and BF.7 are currently circulating, WHO continues to ask that further sequences be shared with open access databases such as GISAID for deeper phylogenetic analyses, and for continued collaboration with technical groups working on virus evolution, clinical care, and beyond.

“WHO will continue to work with China, providing technical advice and support, and engaging in analysing the situation,” the agency said.

On Saturday, Jiao Yahui, the head of the Bureau of Medical Administration, announced there have been 59,938 Covid deaths between December 8 and January 12.

It included about 5,500 who died of respiratory failure, while the rest also had underlying health conditions.

China is in the grip of a major wave of the virus after abruptly lifting its zero-Covid restrictions in December last year, with some major cities estimating between 70 percent and 90 percent of their populations have been infected.

Last week, the World Health Organization had criticised the new definition as too narrow and an under-representation of the true impact of the outbreak. Chinese authorities responded that it was not necessary to attribute every death.