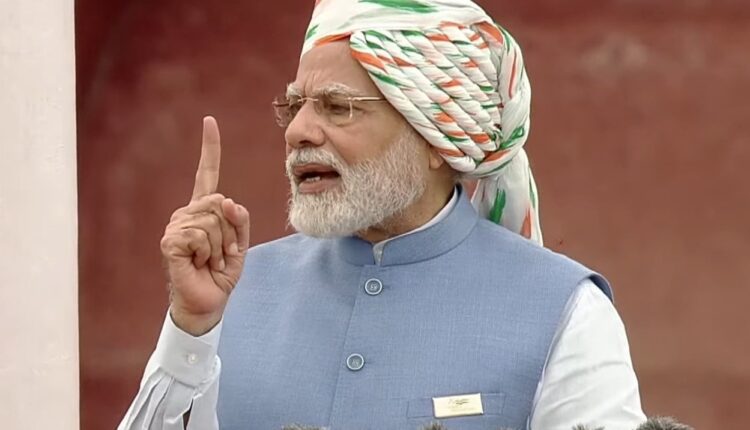 While addressing the nation from the ramparts of the Red Fort on the occasion of 76th Independence Day (August 15, 2022), PM Narendra Modi raised concern over corruption and nepotism, saying “corruption is eating up my country like termites and nepotism is snatching opportunities from all. He urged the 130 crore Indians to pledge to rid India of these. Of course, corruption is not only growing but gnawing at the vitals of our economic system. The proximate cause of corruption is our flawed electoral system and the present capitalist system that strives on greed, fraud, and deceit.

But the man who rode into power to fight black money to ensure corruption-free governance is speaking about the danger of corruption after eight years of rule. This sounds ridiculous and preposterous. He should blame his government for failing to curb corruption and nepotism.  What he did not tell is that corruption and black money is distorting our electoral  outcome.

In 2014, before becoming prime minister, Narendra Modi, promised to bring back black money and deposit Rs 15 lakh to every citizen’s bank account. On November 8, 2016, he implemented the draconian measure of demonetization to curb black money eradicate corruption, and eliminate fake currencies, obliterate terrorism which devastated the economy and triggered enormous problems for the masses but failed to make any dent. Rather, black money holders converted their black money into white money easily.

But during his regime corruption has not only increased but crony capitalism has taken a deep root in the economic system and played havoc and corruption has assumed the shape of pillage and plunder. Now politicians and government officials are found keeping huge black money and abetting corruption. Growing NPAs, loan write off, and banking frauds are new forms of corruption today. Who are beneficiaries of those irregularities?

The index, which ranks 180 countries and territories by their perceived levels of public sector corruption according to experts and business people, uses a scale of 0 to 100 to rank Corruption Perception Index (CPI), where 0 is highly corrupt and 100 is very clean. On the scale, India scores 40, which shows that India’s public sector is nowhere near to being clean from corruption. The global average is 43 points.

But the case of India is particularly worrying. According to the report, while the country’s score has remained stagnant over the past decade, some of the mechanisms that could help reign in corruption are weakening. There are concerns over the country’s democratic status, as fundamental freedoms and institutional checks and balances decay.”

The report highlighted concerns over the risk to journalists and activists who have been “victims of attacks by the police, political militants, criminal gangs and corrupt local officials.” “Civil society organizations that speak up against the government have been targeted with security, defamation, sedition, hate speech and contempt-of-court charges, and with regulations on foreign funding.”

The root of corruption lies in our opaque electoral process where huge black money is spent by politicians and political parties. Prime Minister must be aware of this and how much his party spends and how that money is acquired and why one pays as a political party. Can anyone pay without any personal interest? That is why some dishonest people indulging in corruption and fraud contributing to political party funds to escape punishment.

The report, named ‘Poll Expenditure: The 2019 Elections’, has termed the recent democratic exercise as the ‘most expensive’ election ever, anywhere with an estimated Rs 100 crore spent in each Lok Sabha constituency. Effectively, an approximate Rs 700 per vote was spent.

In terms of individual constituencies, there are at least 75 to 85 seats where individual candidates spent more than Rs 40 crore, which is over 50 times the expenditure limit (Rs 70 lakh) mandated by the polling body per candidate in a constituency. Voters are bribed/purchased to cast votes in favour of those who are capable of giving more money or other benefits to them.

Among the 44 regional political parties, the top 10 parties declared assets worth Rs 2,028.715 crore or 95.27 percent of the total assets declared by all the regional parties for 2019-20 fiscal. The highest assets were declared by Samajwadi Party (SP) at Rs 563.47 crore (26.46 per cent), followed by Telangana Rashtra Samithi (TRS) worth Rs 301.47 crore and All India Anna Dravid Munnetra Kazhagam (AIADMK) worth Rs 267.61 crore.

The unsavoury reality is that crony capitalism donates huge money to political parties. According to a report by the Association for Democratic Reforms, in FY 2019-20, when the Lok Sabha elections were conducted, political parties received over Rs 920 crores in the form of corporate donations and Prudent Electoral Trust was the top contributor to the BJP and INC.

As per the Election Commission’s list, between 2017-18 and 2019-20, 17 political parties actually received funds of Rs 6,201 crore through electoral bonds, an instrument introduced in 2018 through which anyone can anonymously donate money to political parties. BJP pocketed 67.8% out of this amount.

In reality, the world economic system has been made in such a way, which will enable the rich/corporate behemoths powerful to amass illegal wealth while the poor and middle class would have to pay huge taxes as a proportion of their income.

The act of money laundering, round-tripping, and the tax haven are root causes of black money and corruption. Money laundering, which is the process of concealing the proceeds of crime and integrating them into the legitimate financial system, is also a method used to hide the nature, source, location, situation, and movement of a crime or to give a legal image to the proceeds of crime.

A tax haven, or offshore financial center, is any country or jurisdiction that offers minimal tax liability (less tax rate compared to own countries) to foreign individuals and businesses. Tax havens do not require businesses to operate out of their country or the individuals to reside in their country to receive tax benefits which allow outsiders to easily set up businesses there.

Round tripping refers to money that leaves the country through various channels and makes its way back into the country often as foreign investment. This mostly involves black money and is allegedly often used for stock price manipulation. Round tripping is often done through a series of transactions that don’t have any substantial commercial purposes, which makes it fall within the trappings of GAAR.

It could be invested in offshore funds that in turn invest in Indian assets. The Global Depository Receipts (GDR) and Participatory Notes (P-Notes) are some of the other routes that have been used in the past. There are a number of observed factors that promotes round-tripping. Mainly, tax concessions allowed in the foreign country encourage individuals to park money there and then reroute it.

Question creeps in mind: why does Prime Minister allow the rich and people with a criminal background to contest elections and even become minster in their own cabinet? Why political parties are allowed to receive funds from rich/corporate/black money holders who influence government policies in their favour and escape punishment with impunity?

Why selective raids are made by ED or CBI on those who are against the ruling party while politicians or supporters of rung class are never raided? Corruption is the act of abusing entrusted power for private gain. Corruption is linked to human rights and democracy. Protecting human rights and democracy plays a vital role in fighting against corruption.

The Corruption Perception Index shows that countries with higher civil liberties score higher on the CPI. Corruption is something that can be fought against by taking measures. The report recommends methods to end the vicious cycle of corruption, human rights violations, and democratic decline.

Government should not put restrictions on freedom of expression. It helps to bring to the light corrupt activities which would have remained hidden otherwise. Anti-corruption agencies and supreme audit institutions need to be independent, well-resourced and empowered to find out corruption activities and work against them.

The government should ensure that the corrupt and their accomplices cannot escape justice and will have to face the consequences of their actions. Every individual should be aware that the government and its services are for the benefit of all, and the power that comes along with being in the public sector should not be abused for personal gains.