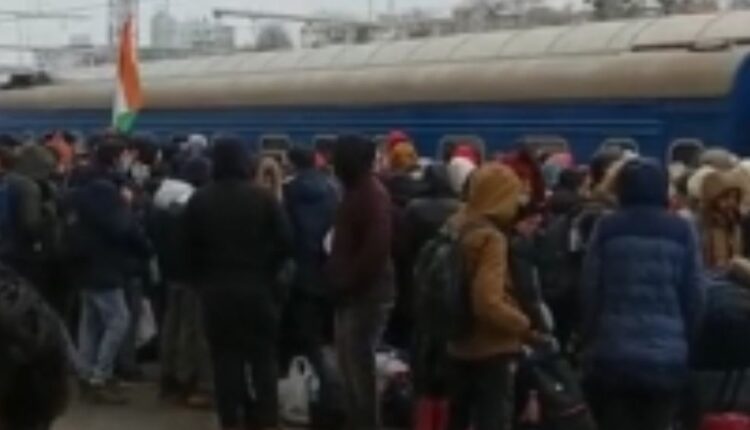 New Delhi: The Indian Embassy in Ukraine has warned the country’s students in Kharkiv to immediately leave the city. However, this seems to be difficult as after trudging for miles these students are finding that the doors of the trains passing through the Kharkiv railway station remain closed.

They are not able to catch trains to reach the borders of the countries bordering Ukraine.

Ashutosh Chauhan, a resident of Madhya Pradesh’s Bhopal, stranded at Kharkiv’s railway station, told IANS, “All the students here are leaving by themselves. To my knowledge, there are about 1,500 students who are stranded in Kharkiv.”

“We left our hostel at 6 in the morning. The hostel was about 14 km away from the railway station. Two trains have passed through the station but the doors were not opened. There is no one to help. We are making our own arrangements.”

Apart from the Indian students, there are also citizens of Ukraine queued up outside the station, he said. “We have brought food packets with us. There is constant shelling. Explosions can be heard constantly from here.”

The death of Indian student Naveen Shekharappa on Tuesday has triggered further panic among the students in Ukraine and their parents in India.

Meanwhile, the Russian Ambassador to India has assured that an inquiry will be conducted into the death of the Indian student.

Another student Inzamam, a resident of Bihar, was stuck in Kiev for the past several days. Now, after several attempts, he has been able to catch a train and get out of Kiev. “I have come from Kiev to the western side, from here the borders of Romania, Poland and Slovakia are not too far. There is a lot of danger for the students trapped in Kharkiv and Kiev,” Inzamam told IANS.

“There is no food available on the Poland border and it is freezing cold here. I am facing a lot of trouble. It is easy to go through the Romania and Slovakia border. So I will now try to come back to India through the Romanian border,” he added.

The Government of India is constantly trying to evacuate the students from the war-torn country. Several flights have reached Delhi with the students, yet there are many who are still stranded in Ukraine.

Meanwhile, the embassy issued a second advisory within an hour asking Indian nationals in Ukraine to leave Kharkiv anyhow by 6 p.m. (9.30 p.m. IST) on Wednesday. “If you are not able to get a train, bus or any other means of transport, leave Kharkiv on foot by 6 p.m. (Ukrainian time),” the embassy has said in an “urgent advisory”.

Russia shelled the second most populous city of Ukraine, Kharkiv damaging various installations and the fighting has now reached the streets.

“For their own safety and security, they must leave Kharkiv immediately, repeat immediately in the light of the deteriorating situation,” the embassy stated.