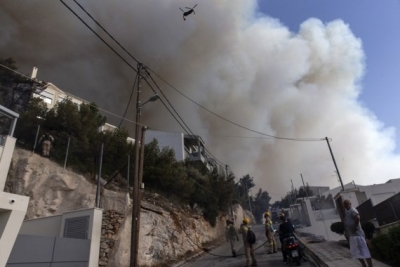 Athens: A major wildfire has erupted in the southern coastal part of Athens, prompting a large response from the fire service as the blaze was reaching residential areas.

Fanned by strong winds, the flames spread quickly across the foothills of Mount Hymettus in Glyfada and Voula regions on Saturday, posing threat to inhabited areas, reports Xinhua news agency.

The Civil Protection service issued an emergency 112 alert to residents of neighbouring areas, urging them to evacuate their houses.

The fire seriously damaged four homes and burned cars, while one fireman was hospitalised with respiratory problems, according to authorities.

More than 100 firefighters aided by six firefighting aircraft and five helicopters dropped tonnes of water in an attempt to douse the blaze.

Greece suffers from many wildfires every summer due to high temperatures and arsonists.

In 2021, hundreds of blazes in the wider Athens region, the Peloponnese peninsula and Evia Island among others decimated more than 100,000 hectares of forestry and farmland in the wake of the country’s worst heat wave in the last few decades.

In 2018, 102 people died in the coastal resort of Mati, near Athens, in Greece’s worst-ever fire disaster.

Another flashpoint? Trouble brews in Lucknow over Tile Wali mosque