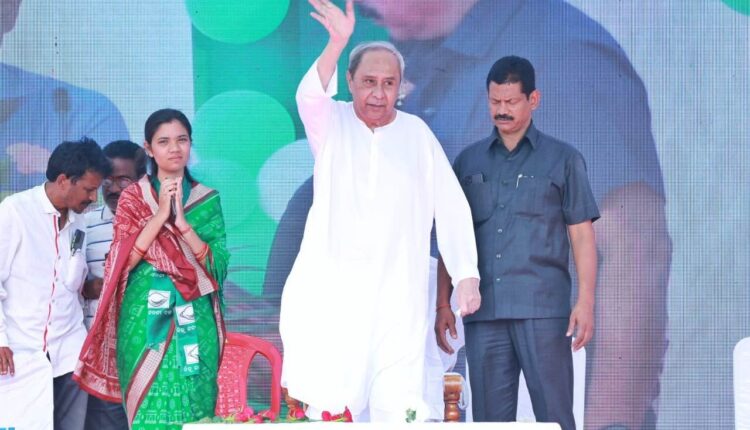 Bhubaneswar: Chief Minister Naveen Patnaik today said the Biju Janata Dal (BJD) government is with the people of Odisha from the cradle to the grave while seeking votes for his party candidate Barsha Singh Bariha for the December 5 Padampur by-election.

“I believe in action rather than words. I will fulfill all my promises to the people of Padampur before the 2024 General and Assembly elections. The BJD government has prepared a manifesto of Rs 1 crore for each panchayat of Padampur and we will finish the work within a year. I will come to you with the list of our works during the 2024 polls,” added the Chief Minister.

The Chief Minister began his speech by paying his deep respect to Lord Nrusinghanath, the presiding deity of Bargarh and renowned Odia poet Gangadhar Meher at public meetings in support of the BJD candidate ahead of the bypoll.

The Chief Minister claimed that he has been with the people of Odisha through thick and thin. “Odisha is the number one state in India in paying bonus to the Kendu leaf pluckers. The state government has recently announced a package for the Kendu leaf pluckers. The Kendu leaf workers have been included in the Biju Swasthya Kalyan Yojana (BSKY) and the state government has been providing assistance for the education of their children,” said the Chief Minister.

The Chief Minister came down heavily on the Centre for the delay in the construction of Bargarh-Nuapada railway line via Padampur. “During Bijepur by-election in 2018, one Union Minister had claimed that Padampur would be connected with railway line at the earliest. Have you seen any railway station or track in Padampur? They have done nothing in this reagard. Now, two Union Ministers are saying that they will start the work after getting land from the state government. I want to ask them whether they have conducted any survey for the railway project and prepared the DPR. Have they finalized how much land they need in which village? Have they applied for the land acquisition with the state government? They have no answer to these questions,” said the Chief Minister.

The Chief Minister claimed that he had made certain commitments to the people of Bijepur during the 2019 bypoll. The state government has sanctioned Rs 4,000 crore for various projects in the constituency. Bijepur will be hugely benefitted by the Gangadhar Meher Lift Irrigation project, he said.

Patnaik alleged that some BJP MPs from Odisha have prevailed upon the Centre to stop allotting new houses to the poor people of the state under the Pradhan Mantri Awas Yojana. The state government will come forward to fulfill the aspiration of people in this regard.

“We have urged the Centre to include certain communities from Odisha in the ST category to provide them reservation in education and jobs. But, the Centre is yet to take any step in this regard,” alleged the Chief Minister.