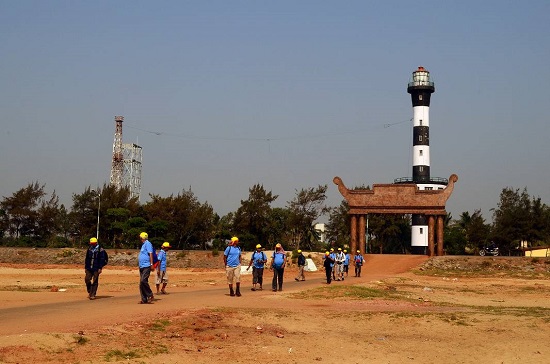 Bhubaneswar: Paradip in Odisha would be developed into a smart port and smart city with an investment of Rs 40,000 crore, Union Minister Nitin Gadkari said on Friday.

“For smart port and smart city project in Paradip, Rs 40,000 crore investment has been approved. The Union government is committed to the development of Odisha,” said the Minister for Shipping, Road Transport and Highways.

He was laying the foundation stone of the second bridge on the Brahmani river in Rourkela on Friday.

He said a railway line would be laid between Paradip and the coal town of Talcher at an investment of Rs 9,000 crore.

Gadkari said over Rs 7,000 crore has been spent on construction of new highways in Odisha during the last three years while the highway length has been raised from 4,632 km to 6,993 km.

First shipment of US crude to India arrives in…

Informing that projects worth Rs 60,000 crore for development of roads in Odisha have already been initiated, he said around Rs 1.5 lakh crore would be invested for expansion of highways and roads in the state in the near future and that the new bridge over the Brahmani river would be completed in two years.

Besides the six-lane second Brahmani bridge, the foundation stone was also laid for the four-laning of the Birmitrapur-Brahmani bypass end section on NH-23 (New NH-143).

The second bridge on the Brahmani, estimated to be built at a cost of Rs 476 crore, was necessitated by the dilapidated condition of the first bridge on it erected during in the 1960s.

The BJP has been focusing on Odisha ahead of the 2019 Assembly and Lok Sabha elections. In the recent panchayat elections in the state, the party fared better than Congress, becoming the number two party in Odisha after the ruling Biju Janata Dal.

Another 11 micro composting centres to function in Odisha…

Govt land to have GIS mapping in smart city in Odisha