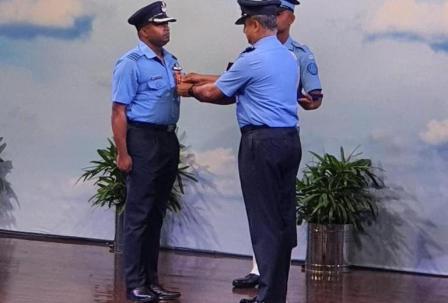 Rourkela: Indian Air Force Wing Commander Chinmaya Patra has been conferred with Vayu Sena medal for his distinguished service during an operation to rescue police personnel who sustained injuries in Naxal attack in Chhattisgarh.

Chief of Air Staff Air Chief Marshal Vivek Ram Chaudhari felicitated Patra, a resident of Rourkela in Odisha, with the medal at a special ceremony in New Delhi today.

Several police personnel had died and many others sustained injuries in Naxal attack at Bijapur in Dantewada district of Chhattisgarh on April 3, 2021. The Indian Air Force had launched Operation Triveni to rescue the injured personnel.

Patra, a Wing Commander in MI-16 V5 chopper unit, had escorted two helicopters to the high risk zone during the rescue operation. He had played a key role in rescuing at least 18 injured police personnel and shifting the bodies of 22 martyred jawans during the operation.

Born to Naresh and Sabitra Patra of Chhenda Colony of Rourkela, Patra had completed his schooling from Chinmaya English Medium School. He had joined National Defence Academy in 2003.

He had begun his career as Squadron Leader in Indian Air Force in 2007. Patra was promoted to Wing Commander in 2020.