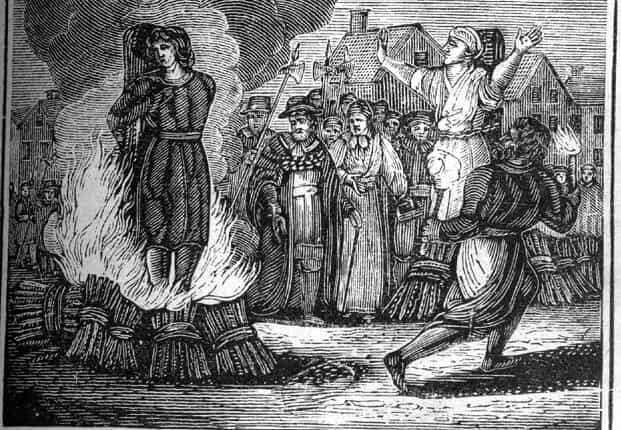 The recent days have been clouded with news over Rhea Chakraborty and her alleged involvement in the murder of her boyfriend, Sushant Singh Rajput. TV news channels and social media were full of rant and raved about how Rhea cashed on Sushant for her benefits. In addition to this, there was another discussion about how Rhea, a Bengali woman, had practiced black magic on Sushant Singh, which led to the latter’s death. We had come across a similar discussion in the past when Kangana Ranaut was accused of the same superstition when her ex-boyfriend Adhyayan Suman accused her of performing ‘black magic’ on him.

In both cases, these women faced vilification, and malicious campaigns were run against them. Kangana successfully came out of it, and she ridiculed the whole episode talking about how, despite scientific temper reaching its pinnacle, people talk about such practices. Unfortunately, Rhea couldn’t be saved from this horror. She has been branded as a witch, and the Indian media delivered its best through its media trials to hunt her down.

Witchcraft has a different connotation for the rural women in Odisha:

The whole episode might have had a different meaning for the women in the state of Odisha. The term witch-hunting might have evoked some horrifying memories for the women who might have survived or are still the victims of the state’s superstition-bound violence.

In a gory revelation, as per the National Crime Records Bureau (NCRB) reports, the state has recorded at least 30 deaths from January to August this year, while over 100 more violence cases have been reported. A high of 58 people were killed in 2016. The numbers dropped to 36 in 2017 but rose again to touch 39 in 2018.

As per the same report, in 2018, 73 witchcraft-related cases were reported across Odisha, out of which 18 were murders. Another 99 cases, including 18 murders, were recorded in the state in 2017.

In a gruesome witch-hunt murder on July 13, 2015, six family members, including four children, were executed by the dwellers of Lahanda village in Keonjhar district. In a more recent case, Swarnalata Minz from Karakachia Nuasahi village of Mayurbhanj district severed the head of a 60-year-old woman, Champa Singh, suspecting her to be the cause of the death of her younger daughter. The article in India Times also accounts for other incidents wherein the villagers have brutally killed people suspected of black magic in Odisha.

Despite, Odisha government’s ‘Prevention of Witch Hunting Act in 2013’, the brutal activity seems to spring up each time the state administration thinks it has finally freed itself from its clutches. And who are the primary targets- the susceptible section of the society? In this case: the women and the children of the lower castes.

An interesting article by Times of India talks about the earliest evidence of witch hunts in India, the Santhal witch trials. This trial was in 1792 in Singhbhum district of Chhotanagpur division in British India (located in the present-day Jharkhand). Santhals, an Adivasi population, believed in witches, who had the power to kill people by feeding on their entrails and cause fevers in cattle, among other evils. According to the Adivasis, the cure was the elimination of these witches.

But the reasons these days are more evil than spiritual. Family disputes and caste conflicts are the key factors driving violence in the state’s affected areas. Whenever a social hierarchy is threatened, violence or mob lynching becomes a necessary tool to reinstate the displaced hierarchy. And most of the time, the poor and the defenseless fall prey to this sorcery violence.

Talking about social order, it’s not just women, men, especially Dalits, Adivasis, and Muslims are equal recipients of this mired superstition. Cases in Odisha also include men; thus, the Odisha police’s Crime Branch has proposed that the State government also recognize men as victims of witch-branding violence under the Odisha Prevention of Witch-Hunting (OPWH) Act.

Education and social awareness was the solution until recently:

As a solution, various NGOs and educational institutions have spoken about how social awareness and education can play a vital role in deterring these crimes of the society, but unfortunately, this time, it was the lettered community that led the campaign of the witch-hunt. The repercussions can never be imagined by these people who quite comfortably used the term for garnering the highest TRPs for their channel. This episode would only reinstate the myth that witchcraft exists, which would lead to more innocents’ deaths.

The ray of hope:

The provisions of the Indian Penal Code, although applicable for the crime associated with the menace, have still not been successfully enforced; thus, the alleged victim is either mercilessly murdered under suspicion of practicing witchcraft or brutally tortured in these places of Odisha.

Also, the Indian national media would never cover the story, so the rest of the world would never discover the underlying India of the 21st century.

In such a scenario, the only hope is the positive changes we can bring in the society to drive it towards a better tomorrow. E.g., the witch-hunt victims’ memorial built in Keonjhar, a worsely  a symbolic statue in memory of all the innocents who were killed after being branded as a witch in the district. The police and the state administration discussed various measures how to curb the menace in the state in the presence of the 300 witch-hunt victims and members of self-help groups.

People in these remote areas are already far away from the latest advancements in society. As the educated mass, we need to deliver our moral responsibility by enlightening them with progressive thoughts and fighting superstition.