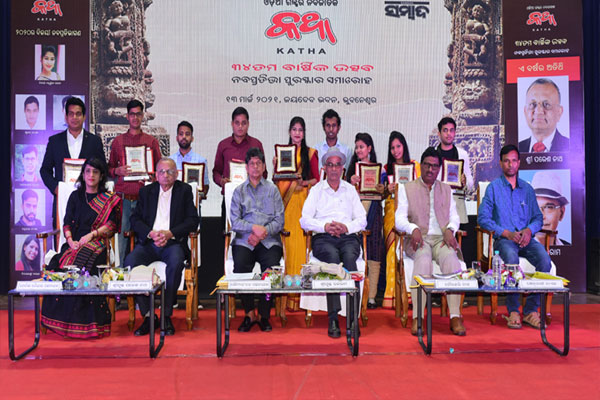 Bhubaneswar: Encouraging new writers means creating a new generation in literature. When new writers come, new ideas come along with them. A society that does not invite new ideas is only left to stink, Paresh Nath, publisher and editor-in-chief of Delhi Press said at the 34th anniversary of Sambad Group’s popular monthly Odia literary magazine Katha yesterday at Jayadev Bhawan in the state Capital.

Nath was present as the chief guest of Katha’s annual celebration and Nabaprativa Award ceremony here. Among the other dignitaries present at the event were Gourahari Das, Editor of Katha, Monica Nayyar Patnaik, Managing Director of Sambad Group, Soumya Ranjan Patnaik, Editor-in-Chief of Sambad, Balaram, eminent fiction writer and editor of Samkaleen Bhartiya Sahitya and Kshetrabasi Naik, Sub-Editor of Sambad.

Pointing at the declining reading habits of today’s generation, Nath narrated that around two and a half millennia ago, emperor Ashok had set up inscriptions in various remote parts of the country. His inscriptions prove that there was literacy in those parts of the country at that time and people had a habit of reading. However, in the later few centuries, that habit of man gradually disappeared. This was revealed from research of Ashoka’s inscriptions during British rule. With the introduction of the English language, the practice of reading among Indians returned once again.  But now, we are again going to create a generation that is least interested in reading printed texts. In today’s digital age, young people don’t want to write a single line on their own. They can’t even write a five-page love letter for their lovers.

Nath added that readers, not awards, are the author’s greatest asset. People need to enhance their reading habits. They need to practice reading printed books, not the ones on social media. This is because when they read printed books, it draws a picture in their minds and that stays intact in their memories forever.

Joined the event as the chief speaker, Balaram, Editor of Samkaleen Bhartiya Sahitya said that everyone who writes is a writer but all that they write are not considered compositions.

An author’s writings must be fearless and high-handed. The article should reflect the country’s economic, political and social situation. But nowadays, an author does not have the courage to write about the situation in the country. The country’s media has also been sold. Writers, journalists and editors who are not willing to pay such a price should not step into the fields of literature or journalism.

He further added that the conflict between the left and the right in politics and literature was still ongoing. So we should look straight at our country and not left or right. Only then, we will be able to look at everyone in our society as equals. He also mentioned that although Hindi is our constitutionally recognized official language each regional language in our country has its own uniqueness. Hindi literature is not a rich as Sanskrit, Tamil, Telugu and Oriya literature are.

Presiding over the program, Soumya Ranjan Patnaik, Editor Sambad, said that if we don’t enrich prose literature, our language will never be enriched. Everyone says Odia language is dying. When an Odia-speaking person says that the Odia language is dying, it seems as if they are committing suicide every day. There is a need to think more about how the Odia language can survive better than this. The era of printed paper books, magazines, or newspapers is slowly heading towards an end. As an alternative, we need to pay attention to digital media or the potential of science and technology.

Further, Gaurahari Das, the editor of Katha, gave a welcome address and spoke about the launch of Katha magazine and the efforts of Katha to promote new talents in the field of Odia storytelling. Kshetrabasi Naik invited the guests to the stage and thanked them. On this occasion, with the March issue of Katha, a book ‘Kathatie’ was unveiled. 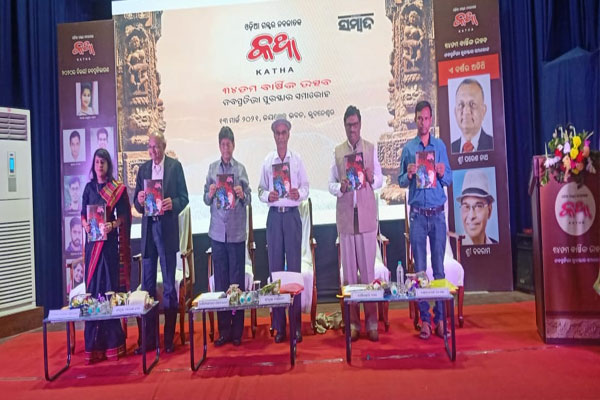 Later in the event, nine new talents were awarded with the Nabarprativa Awards.

Last October, Katha had organized a Nabaprativa competition in which, Sahadev Sahu, Paresh Kumar Patnaik and Hiranmayi Mishra were present as judges. Over 300 contestants participated in the competition out of which nine were awarded during Katha’s anniversary event.

This apart, four others were awarded the Kanak Manjari Scholarship 2021 organized by KMBB College of Engineering and Technology.

Biswajit Mohapatra from SCS College ranked first and received a scholarship of Rs.50,000. On the second spot was Abhinash Panigrahi of Khallikote Autonomous College was given a scholarship of Rs 30,000. The third and four receivers were Chinmath Shivnarayan Bihari of KMBB Higher Secondary School and Jagyasini Nayak of Ravenshaw Collegiate School. They were awarded scholarships worth Rs 20,000 each.

Fire breaks out at Barunei hill forest in Odisha [Watch]