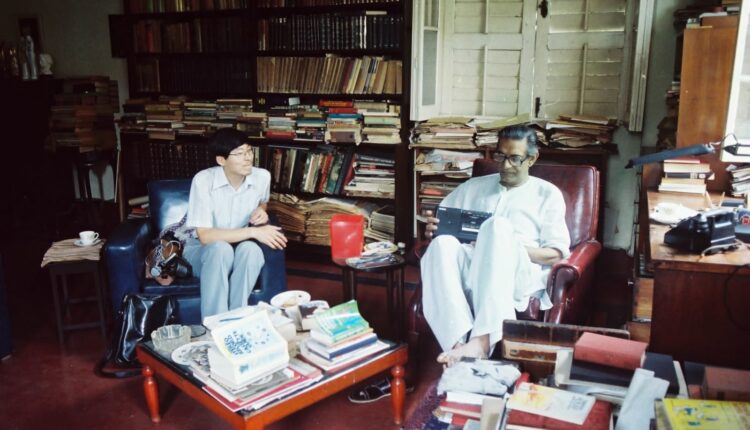 Kolkata is my hometown. The city is far closer to my heart than any other places where I have spent my life. I studied there, taught there, enjoyed music concerts, and met and courted my-wife-to-be. I also made many friends — some passed away, but others still heartily welcome me on my visit.

I travelled to Kolkata on 26th January, 1976, for the first time. I was there to run evening Japanese classes at the Consulate General of Japan. In the daytime, I studied Bengali language and literature, both privately at Jadavpur University. (Later, I studied at Visva-Bharati as well)

Apu Trilogy was shown at Iwanami Hall in Tokyo several times in the mid-1970’s. Iwanami Hall, a cinema theatre run by Ms Etsuko Takano and supported by Mr. and Mrs. Kawakita (Founding CEO, Toho-Towa Film Company), was one of the major art centres of Japan at that time; and the very first film they showed (in February 1974) was Apur Sansar, the last of Apu Trilogy. Due to Mrs. Kawakita’s recommendations, many of his films have been shown in Iwanami Hall since then. While we had plenty of opportunities to watch European/American films, Satyajit Ray’s films were practically the only Asian films of high quality we could watch in those days, so they were very popular among the Japanese of my generation.

Apur Sansar became my favourite, and I watched the movie at least three times. I still vividly remember various scenes of the film — Apu’s flat with the sounds and smokes of trains coming from Sealdah Station, his night walk with his friend Pulu on the streets of Kolkata, his boat journey on the river, and his union with Aparna in the village.

I also managed to watch Charulata just one month before I departed for Kolkata. In this film, I was particularly attracted by Amal’s beautifully handwritten Bengali scripts in the notebook Charu gave to him. (I later published the Japanese translation of Tagore’s ‘The Broken Nest’ on which the film was based)

After having studied in Kolkata and Shantiniketan, I returned to Tokyo in September 1980 and started to teach Bengali, edit Kalyani (a magazine of Bengali literature in translation), and publish the translations of works by major modern Bengali writers including Tagore, Tarashankar Bandyopadhyay and Mahasweta Devi. I also played esraj in the music functions of Rabindra-sangit/nritya, and formed ‘India Japan Music Interface’ with my musician friends to invite Shri Manilal Nag and Pandit Mahapurush Mishra for a concert tour throughout Japan. Japan was at the peak of its economy, and many of our friends lived vagabond lives without caring much about their future.

In 1985, Iwanami Hall decided to show Satyajit Ray’s Pikoo and Sadgati together. At the same time, they also planned to bring his new film Ghare Baire (‘Home and the World’) to the Japanese audience. The latter had just been released — in January in the same year. I was asked to help subtitle this film, and was also given an opportunity of translating Tagore’s original novel for publication. For the purpose of publishing an interview with Satyajit Ray in the pamphlet of the film, I visited him at his home in Kolkata on 5th August, 1985. In spite of his heart problem at the time, he kindly agreed to meet me. In the interview he talked freely and spontaneously on many topics.

First of all, I asked him about the history of the film soon to be shown in Japan, as I read that he had planned to make a film from Tagore’s Ghare Baire long ago, even before he made Pather Panchali. According to him, it was indeed planned that he would write the script based on the novel and his friend direct the film. It didn’t eventually materialise, however, due to disagreements about the script between him and the producer. Now, after many years, he returned to the original plan of making a film based on this novel, which was his long-time favourite. It has a complex structure involving both love and politics, and he thought he could make a very powerful film out of it. He looked at, and wasn’t satisfied with, the script he had written when he was young, so he decided to write a completely new script. He looked for an actress and two actors who could play the three main characters of the film — particularly an actress who could play the role of Bimala. He then saw Swatilekha Chatterjee on the stage and thought she could. He was confident with the other two actors whom he worked with in other films — Victor Banerjee (for Nikhilesh) and Soumitra Chatterjee (for Sandip). Shooting started; however, due to his illness, he couldn’t complete the outside shootings and had to ask his son to do them.

He talked about Pikoo and Sadgati, too. Pikoo, made for French TV, was based on the story entitled Pikoo’s Diary written by Ray himself some 15-20 years before, while Sadgati, made for Indian TV, was based on a story written by Premchand in the 1930’s. He summarised the stories of both films, and told me that Mrs Kawakita liked them and proposed that the two films be shown together in Tokyo.

The talk then moved to Ray’s writings. He mentioned his latest work, the translation of Molla Nasir-uddin’s Stories, which, much to his happy surprise, I happened to be using in my Bengali classes in Tokyo. He then talked about the recently published When I was Small, a memoire of his childhood. I had read the book and remembered that in one place he wrote he used to practice judo by a Japanese named Takagaki, a famous judo expert. I knew that Mr. Takagaki had been invited by Tagore to Shantiniketan in 1929 and had taught there for two years. It appears that after he had left Shantiniketan he lived in Kolkata, teaching judo privately. Ray started to go to learn judo from Mr. Takagaki when he was 14 years old.

At the end of the interview, I asked his view about contemporary Indian films, since they started to be introduced to Japanese audience around that time. He said he was glad to find that quite a few directors of younger generations were producing serious films of high quality. Regarding his own films, he was more than satisfied with how the Japanese cinema critics wrote about them. In particular, he was delighted at how Akira Kurosawa spoke highly of his films on a number of occasions. A film director of his calibre, he believes, would know better than anyone else how to evaluate them.

After this, I translated the whole interview for the pamphlet of Ghare Baire. Later in the same year, when I received some remuneration for this publication, I wrote to him asking how to send the money. He wrote back, saying that he didn’t need money, but he’d be happy if he could receive a Japanese painting brush instead. (In the interview, he had mentioned that some Japanese students in Shantiniketan, who loved his films, visited him and gave him a box of Japanese paints.)

In 1986, my wife went to Kolkata. I asked her to pass to him a set of natural mineral pigments used for traditional Japanese painting with painting brushes, together with the published pamphlet and poster of the film. In Kolkata, she rang him to make an appointment, visited him and handed those to him. She said she was impressed by the deep tones of his voice over the phone; she was even more impressed by his dignified appearance when she met him. Later, we received his second letter expressing gratitude for our gift. Those beautifully handwritten letters remain our treasure.

The full transcript of my interview with him was published digitally on the website of DaakBangla last November. It is planned that this transcript be published as part of a book commemorating the 100th anniversary of Satyajit Ray’s birth.

The author is currently a researcher at the Research Center for Knowledge Science in Cultural Heritage, Doshisha University, Kyoto.