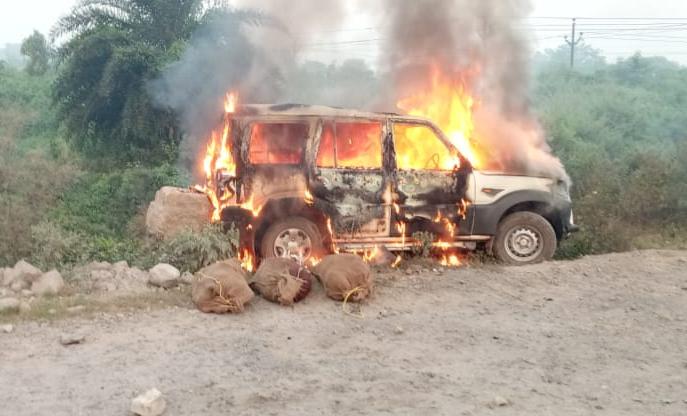 The bike-borne miscreants also thrashed the three occupants, including a woman on the spot before setting the four-wheeler on fire. The incident took place at around 5.30 AM.

As per sources two youths and a woman were en-route to Rourkela from Lathikata area via Keked Road in the wee hours today. A group of miscreants came on motorcycles and intercepted their SUV near Heked Road. They dragged the three out of the vehicle and thrashed them black and blue. The anti-socials later pulled out three sacks  from the SUV,  torched the vehicle and handed over the trio to police. However, the contents of the sacks were not known till the last report was filed.

On receiving  information, a firefighting team reached the spot and doused the flames. However, the vehicle was completely damaged by the time.

Meanwhile,  DSP Aseem Panda and Tangarpali police have begun an inquiry into the incident.