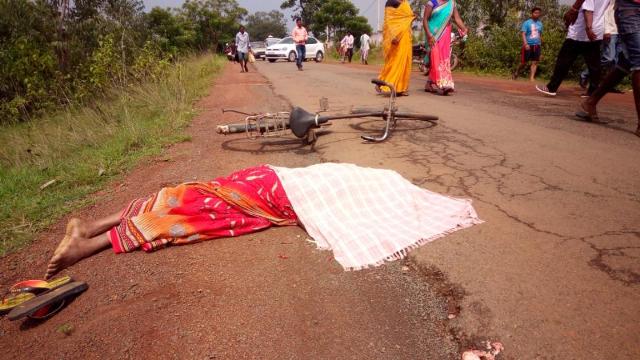 Rairangpur: A woman died and her husband sustained injuries after a truck hit bicycle in front of a school here in Mayurbhanj district today.

The deceased woman was identified as Nandini Singh, wife of Surath Singh, who was injured in the incident. They are the residents of Manich village under Bisoi block in the district.

The incident took place in front of the Jamirdiha Model School on Rairangpur-Bisoi National Highway 50.

According to reports, the couple met with an accident while they were returning to home from hospital on a bicycle. A cement-laden truck travelling from Tata to Bisoi was coming from the opposite side and hit the cycle following which Surath lost balance over it. His wife Nandini, who was sitting on the carrier, fell down and the truck ran over her.

While Nandini died on the spot, Surath was rushed to the Public Health Centre (PHC) in Bisoi for treatment.

On receiving information, police reached the accident site and sent the woman’s body for postmortem. They seized the truck and arrested driver Ashok Kumar and helper Jayprakash in connection with the incident. Both the accused are from Hajipur area of Bihar State.