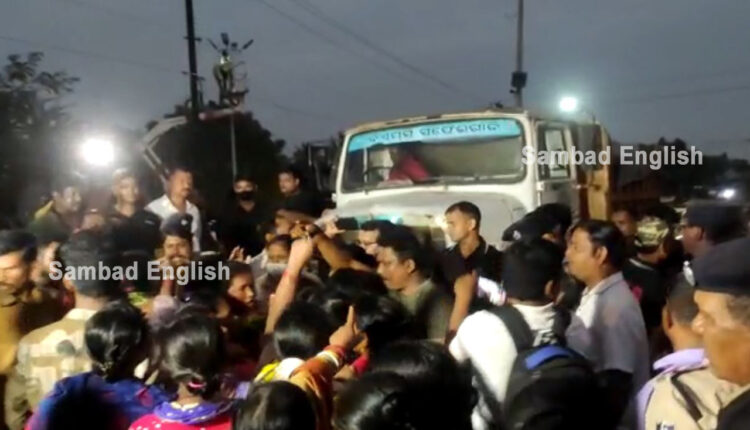 Bhubaneswar: A woman (around 55 years of age) was killed on the spot and her son sustained grievous injuries after a motorcycle that they were riding was run over today afternoon by a garbage carrier vehicle of Bhubaneswar Municipal Corporation (BMC) near Dhirikuti slum of VSS Nagar here.

The identities of the deceased woman and her son have not been ascertained yet.

According to a source, the motorcycle-borne mother and son were on their way back home, when the fatal mishap took place. The injured was rescued and rushed to Capital Hospital for treatment.

The woman was a widow and had been eking out her living by working as a domestic help in the nearby locality, a local resident expressed.

A number of locals staged a blockade by keeping the body on the VSS Nagar-Sainik School road following the incident. Tension flared up in the locality and some locals resorted to stone pelting and manhandling with the police force that reached the spot to bring the law and order situation under control.

Mancheswar police had to baton charge the irate locals when they attempted to set the BMC garbage carrier truck including a police vehicle on fire.

Irked by the incident, locals have warned to stage a sit-in tomorrow.