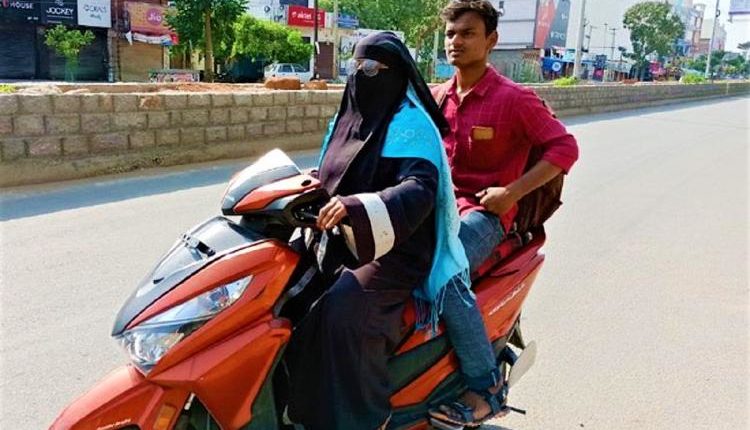 Hyderabad: As the states have closed down their borders to prevent movement of people during the ongoing 21-day nationwide lockdown to contain the spread of coronavirus pandemic, a Telangana woman rode nearly 1400 km on a scooter over three days to bring home her son who got stranded in Nellore in neighbouring Andhra Pradesh.

The woman, identified as Razia Begum (48), travelled from Nizamabad in Telangana to Nellore in Andhra Pradesh on a scooter to bring back her 17-year-old son. She started on the arduous journey on Monday morning armed with local police permission and reached Nellore on Tuesday afternoon, picked up her son from his friend’s place and headed back home. She reached home on Wednesday evening, having covered a total distance of 1400 km in three days.

Razia carried rotis and sabzi along with her for the journey. She took 15-20 mins breaks at fuel stations, rehydrated herself and let the vehicle cool down. When she reached the Telengana-Andhra border, it was late evening and the cops were surprised to see her. The cops were taken aback when she narrated her story and it took a lot of time to convince them. The cops were worried about her safety as there was no one on the highway and the night was falling.

The highway was dark and scary and lonely, but I had to pick up my son that gave me the courage to move forward. I was stopped at a checkpost at around 2 am on Tuesday on the outskirts of Nellore. After listening to my story they informed that the road ahead was dangerous and advised me to halt for sometime. I waited at a road-side shelter near the check post till 4 am and called my son that I was nearby, Razia said.

She is a government school headmistress from Bodhan town in Nizamabad district, about 200 kms from Hyderabad. Razia, who lost her husband 15 years ago, had been living with her two sons, an engineering graduate, and her 17-year old, aspiring to become a doctor.

The woman explained her situation to Bodhan Assistant Commissioner of Police (ACP) V Jayapal Reddy, who, she said, gave her a letter of permission to travel. According to her, she was stopped at several places by the police in two states, but was allowed to continue her journey due to the permission letter.

Once the news broke on social media, netizens saluted Razia’s grit, determination and love for her son.