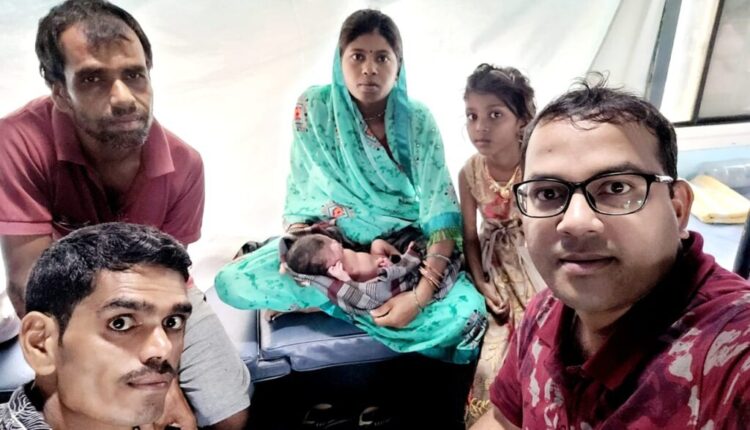 Bhubaneswar: Giving birth to a baby in a moving train is indeed unsafe for a woman. However, a doctor from Odisha became a saviour during such a situation by ensuring safe delivery amid lack of essential equipment.

Biplab Biswakeshari Mohanty, an Army doctor from 120 Infantry Battalion, Bhubaneswar, was returning to his village in Jagatsinghpur by Hirakhand Express from Madhya Pradesh on September 1. A pregnant woman namely Tarabai Patel of Chhattisgarh, who was onboard the train along with her husband and some family members, complained of labour pain at around 11.30 PM.

As her husband pulled the chain to stop the train, the TTEs and guards came to know about the situation. With the train being around 30 km away from the next station, the officials started looking for doctor in all coaches.

When Mohanty, who was present in another coach, knew about the incident, he rushed to the seat of the woman. With the help of some women passengers, he made sure that he delivery was safe, both for the mother and the baby.

Though necessary instruments for delivery were not available in the train, Mohanty used his experience and rose to the occasion. His act has been drawing praise from various quarters.

Narrating the incident, Mohanty said, “When I first attended the woman, the baby was in a crowning stage. It was very challenging to bring the baby out. As no equipment was available, I used things like cotton thread and blade for the post-delivery work. I used the blade to cut the umbilical cord. I waited for a while to remove the placenta from the woman manually. Before deboarding the train in the morning, I came to know that the condition of the mother-baby duo was stable.”

“During training in the Army, we were taught about combat medical care and emergency trauma management, which came in handy during the critical situation,” he added.