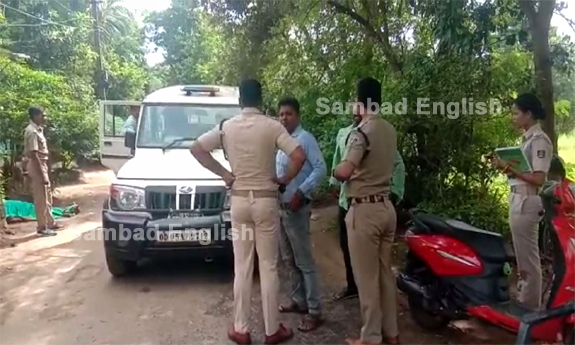 Banapur: A woman was hacked to death with sharp-edged weapons today in the morning at Pankala village of Gambharimunda panchayat under Banapur police limits in Khordha district.

The deceased woman was identified as 44-year-old Minakshi Routray from the village.

The three accused were identified as Laxmi Routray, Bansidhar Routray and Madhab Routray.

According to a senior official in Banapur police station, the victim woman was killed over a family feud in an attack made jointly by two of her elder brothers-in-law and a younger brother-in-law.

At around 8.00 am, the accused Laxmi, Bansidhar and Madhab barged into the house of Minakshi and attacked the family members of the deceased woman. Later, the accused trio dragged the victim out of her residential house and killed her in the courtyard, the senior police official stated.

On being informed by the deceased’s family, Banapur IIC Jaya Prakash Parida, sub-Inspector Debasmita Behera including Balugaon sub-divisional police officer (SDPO) Manas Kumar Barik reached the spot and recovered Minakshi’s body and sent it to a health facility in Banapur for post-mortem.

Police have registered a case in this connection and launched a probe, which is underway.

The three accused are absconding and will be arrested soon, the police official said.